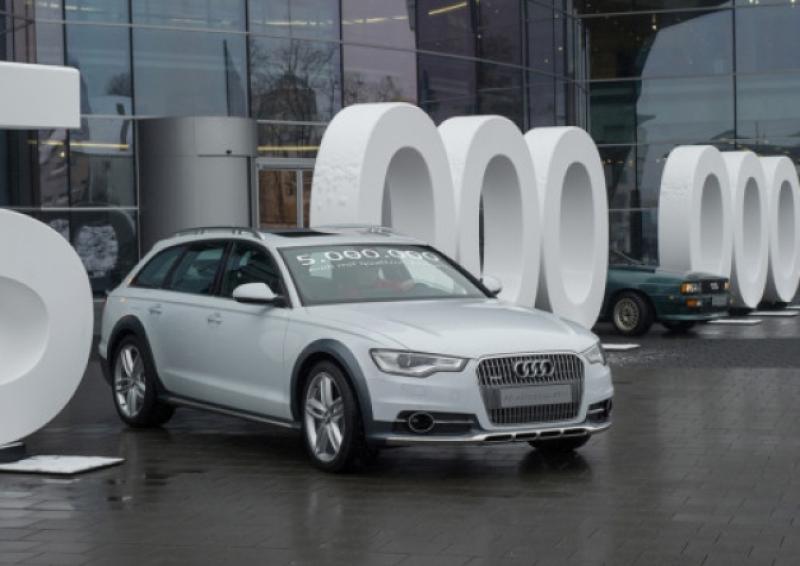 Audi has just proved that there really is safety in numbers by producing its five millionth quattro all-wheel-drive-equipped model – an A6 allroad.

Audi has just proved that there really is safety in numbers by producing its five millionth quattro all-wheel-drive-equipped model – an A6 allroad.

The rugged, air-suspended Avant is just one of over 140 variants across the Audi range currently benefiting from this invaluable all-weather grip enhancer, which made the pioneering transition from rally stage to road courtesy of the Vorsprung durch Technik brand back in the Eighties.

“quattro is one of the key pillars of our brand and has been a critical factor in our successful history,” said Rupert Stadler, Chairman of the Board of Management of AUDI AG. “The quattro permanent all-wheel drive system makes it possible to directly experience our ‘Vorsprung durch Technik.’ We are committed to our pioneering role and will continue to develop this advantage with new technologies.”

An instant hit at the 1980 Geneva Motor Show, the 200PS Audi quattro showcased the first mainstream four-wheel-drive system. It triggered the intensive development that has culminated in today’s leading edge Audi all-wheel-drive technology, which instils impressive all-weather traction and exceptionally high limits of adhesion in the latest quattro variants.

Last year, more than 43 per cent of Audi customers opted for the added reassurance of quattro, and the Neckarsulm plant in Germany – home of quattro GmbH – equipped one car in every two on the production line with the technology.

A rear axle-mounted multi-plate clutch version of the quattro system currently safely contains Audi models with transversely mounted engines from the Q3 through to the TT, and a further developed version will soon return to the all-new A3 and 300PS S3. Models with longitudinally mounted engines, including the A4, A5, A6, A7, A8 and Q7, divide their torque across all four wheels by way of a self-locking centre differential, the most advanced version of which is the crown gear differential used by RS 4 Avant, RS 5 Coupe and RS 5 Cabriolet models, and soon to feature in the forthcoming RS 6 Avant and RS 7 Sportback models.

The advanced crown gear differential channels power to where it is needed, and away from where it isn’t, more quickly than ever before in the interest of optimal handling composure and agility. Up to 70 per cent of torque can be apportioned to the front axle, and up to 85 per cent channeled to the rear, where in the RS models a sports differential is also on hand to divide power between the rear wheels in the most effective proportions possible.

The latest generation R8 incorporates another variation - a viscous coupling capable of diverting between 15 and 30 per cent of torque to the front wheels, depending on conditions. Located on the front axle, the coupling is powered through a cardan shaft that runs to the front from the transmission through the engine’s crankcase.