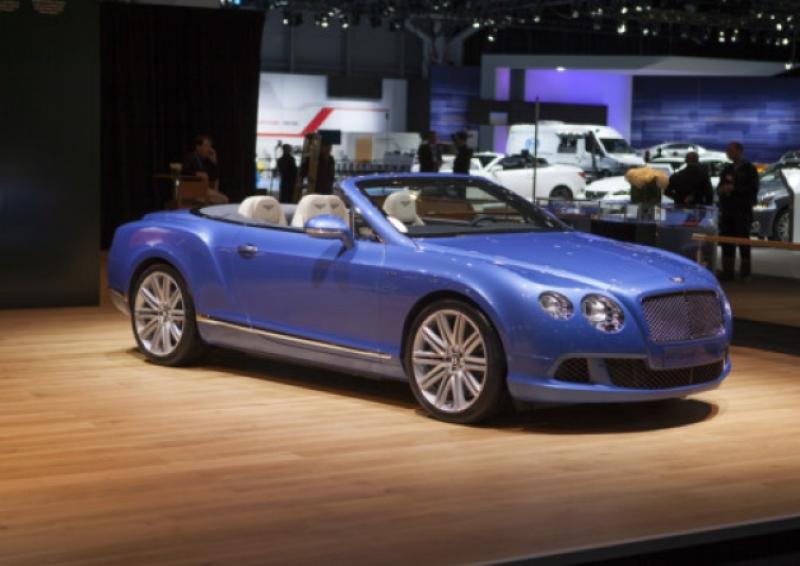 “We’re excited to show the new Flying Spur in one of Bentley’s most important markets in the world – New York,” said Christophe Georges, President and COO, Bentley Motors, Inc.

“The Flying Spur meets the desires of our customers perfectly and is a car only Bentley could make – timeless design inside and out, ultimate material quality, attention to detail, class leading refinement, and effortless performance.”

With its unrivalled blend of effortless driveability, exquisite luxury and craftsmanship, sculpted design and state-of-the-art technology, the new Flying Spur takes the worldwide success of its iconic predecessor further.

Driver and passengers alike interface with the car and the outside world through touch-screen infotainment, mobile connectivity including Wi-Fi, a Rear Seat Entertainment suite and a new bespoke hand-held Touch Screen Remote which allows rear-cabin occupants to control an extensive range of features from the comfort of their seat. An eight-channel, eight-speaker audio system with Balanced Mode Radiators provide high quality sound clarity, with the 1100W Naim® for Bentley premium system available as an option.

Powering the new Flying Spur is Bentley’s renowned 6.0-litre, twin turbo W12 engine, coupled to a ZF eight-speed transmission. Developing 616 horsepower and 590 pound feet of torque, the new Flying Spur features more power than any other Bentley four-door in history. A 14 per cent improvement in the power-to-weight ratio over the outgoing model delivers a breath-taking 0-60 mph time of 4.3 seconds and a top-speed of 200 mph. In the modern Bentley tradition, power is delivered to the road via all-wheel drive with a 40:60 rear-biased torque split for a sure-footed, engaging drive in all road and weather conditions.

The new Flying Spur has a base MSRP of $200,500. Commissioning is available now with arrivals to begin during the second quarter.

Bentley’s showcase of luxury, performance and technology continues with the North American debut of an enhanced specification for the flagship Mulsanne sedan. A range of new luxury features have been added to the Mulsanne and are on display for the first time in North America, offering a new suite of entertainment and communication system options. An Entertainment Specification incorporates the latest in technological developments, with picnic tables designed for an iPad and wireless keyboard and the cabin of the Mulsanne becoming a Wi-Fi Hotspot. A new Comfort Specification, including comfort headrests, footrests and duck down filled loose cushions has been introduced to reaffirm Mulsanne’s reputation as a truly bespoke grand tourer.

Additional enhancements include privacy curtains, which promise to broaden the experience for the Mulsanne rear cabin occupants, allowing them to maximise work or rest as they travel.

The introduction of the new Flying Spur comes on the heels of a successful 2012 in which US sales were up 23% to 2,315 cars. Globally, the company achieved growth of 22% with 8,510 cars delivered to customers. The United States remains the number one market for Bentley worldwide and the region expects to continue to achieve double digit growth in 2013.

In 2013, the new Flying Spur and enhanced Mulsanne will be joined by the all-new Continental GT Speed Convertible, creating the strongest Bentley model line-up ever.