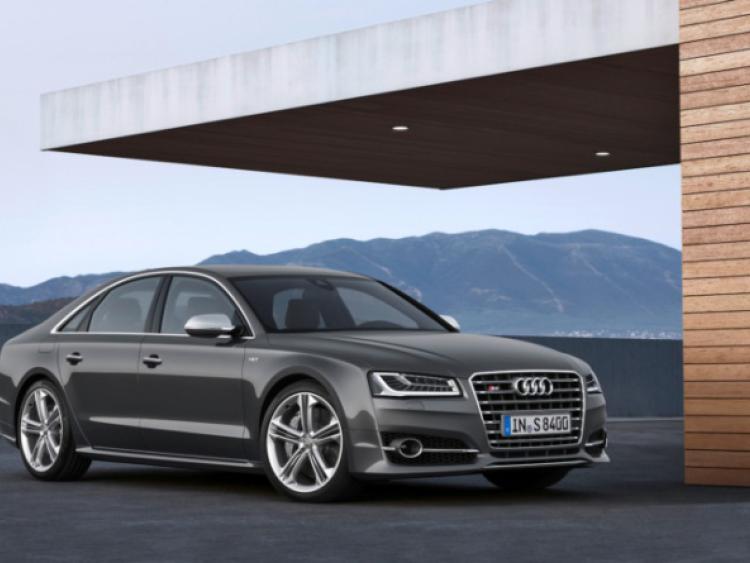 Audi Ireland has announced pricing and order information for its new flagship model – the A8. Unadulterated luxury is delivered with even more style and even greater efficiency in the new generation Audi A8, which will arrive in Ireland in January 2014.

Audi Ireland has announced pricing and order information for its new flagship model – the A8. Unadulterated luxury is delivered with even more style and even greater efficiency in the new generation Audi A8, which will arrive in Ireland in January 2014.

The latest flagship combines revisions to its weight-optimised, predominantly aluminium body with a raft of technological advances including new MatrixBeam LED headlights and an upgraded line-up of EU6-compliant engines.

Built around the lightweight aluminium Audi Space Frame, the almost entirely aluminium body of the new generation A8 has been finessed by subtle resculpting of the bonnet, the single frame grille, the front bumper and the lower edge of the headlight units. At the rear, the design of the LED tail lamps has been revised and the bumper in all models bar the S8 now incorporates two rhomboid tail pipes. New chrome elements, new high gloss black window surrounds and five new colours also mark out the updated car.

The visual appeal, visibility and active safety of the new generation A8 can also now be enhanced by new optional headlights employing MatrixBeam Light Emitting Diode (LED) technology which sets new benchmarks. The high-beam function in these unique headlights uses 25 individual LEDs per unit that can be switched on and off or dimmed individually depending on the situation. This enables the headlight system to react extremely precisely to other vehicles while always brightly illuminating the road. When the on-board camera detects other vehicles ahead, the Audi MatrixBeam LED headlights mask the relevant sections of the high-beam by dimming or shutting off individual diodes. Very bright illumination is preserved in the remaining zones.

The length, (5135mm) wheelbase, (2992mm) width (1949mm) and height (1460mm) of the new generation A8 remain unchanged, and this also applies to the A8 L models with their additional 130 mm of wheelbase and body length added in the interest of rear passenger space.

The even sleeker standard and long wheelbase bodies house a choice of five petrol and TDI engines, the majority of which have been revised to improve performance and efficiency. Available to order from November, priced at €94,080 OTR, and due on Irish shores next January, the new 3.0TDI 260BHP will again constitute the majority of customer orders. The highly efficient 3.0 TDI clean diesel increases from 250BHP to 260BHP but emissions fall 14g to leave it at just 155g which qualifies the engine for tax band C or annual road tax of just €390. Of interest to Irish buyers will be the 4.2TDI which has been upgraded to 385HP with 850NM of torque.

The barnstorming S8 tops out the range. Its 4.0 TFSI engine blasts it from 0 to 100km/h in 4.2 seconds, yet cylinder on demand technology also renders it capable of up to 28 mpg, corresponding to 225 grams CO2 per kilometre. The new A8 is equipped with a fast and smooth-shifting, eight-speed tiptronic automatic transmission which transmits power to all four wheels via the quattro permanent all-wheel drive system in all six-, eight- and twelve-cylinder versions. The new A8 is available to order from your local Audi dealer from mid-November.