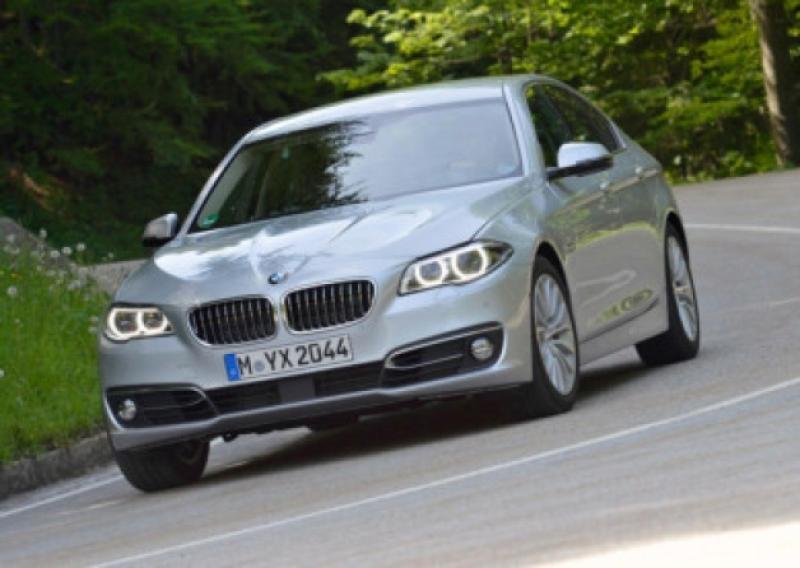 This might not be an all-new model, but there’s no such thing as a minor refresh in the BMW 5 Series - it’s the Munich-based firm’s biggest seller globally, making it the most important car to come out of its factories.

This might not be an all-new model, but there’s no such thing as a minor refresh in the BMW 5 Series - it’s the Munich-based firm’s biggest seller globally, making it the most important car to come out of its factories.

The biggest news for this latest model is on the inside, with an unbelievable array of gadgets and active safety installations now available either as standard or at an extra cost. More of that later.

On the outside, things are more or less as they were, with a long, sloping bonnet that dips suddenly towards a low, trademark ‘kidney grille’. Small tweaks here and there have neatened and sharpened what was until now a slightly tubby design, so its on-road presence is that little bit more imposing.

We will have plenty of model variants to choose from, although there are some xDrive four-wheel drive models that wouldn’t sell well enough here for BMW to warrant re-engineering them for right-hand drive. Sales of xDrive versions are picking up, though, and we’ll get more choice on that front when an all-new 5 Series arrives in two to three years.

The three trim levels are called SE, Modern and Luxury, with M Sport trim packages available to upgrade the higher lines. Not all grades will be available with every engine, though. The key standard equipment on all models includes the excellent iDrive interface, a huge colour widescreen display on the dashboard, digital dials that change style according to the active drivetrain mode, leather upholstery and Euro VI compatible engines. Even the diesels pass the test, having been fitted with BMW’s BluePerformance NOx-reducing additive system.

On the engine front there are six diesels and four petrols, ranging from a 518d with 141bhp and 119g/km to a mighty petrol V8 with more than 440bhp. At the car’s exclusive launch we drove the 535i and 530d options, with the diesel likely to be the more popular of the two. It’s a familiar unit to many current owners and excels at turning liquid diesel into formidably rapid forward motion, even in a car so relatively large.

Sitting in the Luxury-trimmed test car, with its plush and supportive leather seats adjusted to fit, the driving position is absolutely perfect. A flick of the gear lever engages Drive at the other end of the eight-speed automatic gearbox, while the electronic handbrake releases automatically. It’s a little slow to re-engage again when the time comes to park, but for setting off it’s ideal.

The gearbox is, under normal use, a perfect match for the car. Changes are smooth, there’s no interruption to the power delivery and it will even disengage from the engine in an off-throttle efficiency-boosting process called decoupling. Its only failing is that under hard acceleration it changes up too late, allowing the diesel’s power delivery to stall in every gear as the torque curve falls away. For brisk acceleration it’s better to shift manually at around 3,500rpm using the paddles mounted behind the steering wheel.

This 5 Series cruises quietly, with immense stability even above 100mph on the German autobahn. It munches the miles deceptively easily and high-mileage drivers will love it. The variable-rate steering adjusts to make holding a straight course in your lane child’s play.

Speaking of the steering, it’s plain to see why the 5 Series is considered the driver’s choice in the segment. It’s no lightweight but it careers along winding, open roads in a way it has no right to. Large, wide tyres and confidence-inspiring suspension help with outright grip.

There’s simply far too much new technology to list here, but believe me it’s worth getting hold of the brochure. Something that merits a special mention, though, is a set of systems that drives the car completely automatically in traffic jams, accelerating, braking and steering independently of the driver. It’s a Marmite option if ever there was one, but you can’t knock the capability.

Importantly, the new 5 Series rides well, although not quite as well as its larger GT cousin. Small vibrations often shudder their way through the cabin but it’s not too intrusive. Larger bumps are absorbed, but loudly so. Adaptive dampers, which some people have called an essential option, are still on the extras list.

As any dealer will be happy to tell you, the 5 Series is more customisable than ever, from the looks to the leather and from the suspension to the stereo. The basics are excellent enough though, and whatever configuration it’s built into, yet again, it looks hard to beat.