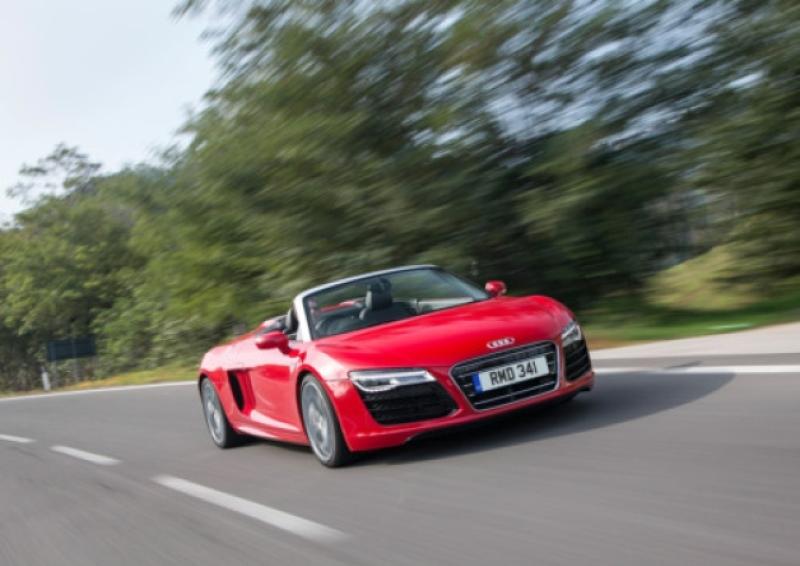 The R8 has been the figurehead of the Audi range since it first rolled into town in 2006 and it’s been working wonders for the brand ever since.

The R8 has been the figurehead of the Audi range since it first rolled into town in 2006 and it’s been working wonders for the brand ever since.

In that time it’s had its roof cut off, a bigger engine stuffed in it and in GT form pumped up and pared back even further. Not many cars could go so long effectively unmolested but for 2013 the surgeon’s scalpel has come out - in a very modest way - and a few tweaks have been made to four-ringed supercar.

Spot one in your rear view mirror and it will be the piercing all-LED headlights that catch your attention first, now standard on all R8 models. The front grille has been subtly tweaked and now wears chromed horizontal details on V10 versions, the side blades are also a little bigger on ten-cylinder models and there is a new front bumper to boot. Massive changes they are not, and with good reason; this is still a fantastic looking car, both in coupé and Spyder forms. It has immense presence, still turns heads and has no trouble of raising the pulse of the lucky person holding the keys.

There’s a new model in the range too, the V10 plus Coupé which has a tweaked version of the 5.2-litre V10 engine producing 550PS, and gets some extra bits thrown in; unique alloy wheels, exterior detailing plus LED lighting and carbon trim in the engine bay.

But the biggest change is in the engine room (well, next to it), as alongside the standard six-speed manual Audi has introduced an S tronic seven-speed gearbox to replace the previous R tronic version. What does that mean? Well the old R tronic box was essentially an old-school automatic, whereas S tronic means that same as elsewhere in the Audi range - dual-clutch wizardry, rapid and seamless full-bore up shifts and much less grief in traffic.

The reality is just the same. Piloting this V10 Spyder out through the centre of London is exactly the kind of challenge that everyday supercars have to take in their stride, and despite it being the middle of the lunchtime rush hour the R8 copes perfectly well. Leave the transmission in automatic mode (you still get a chunky alloy level to select the gearbox’s actions) and you can pedal the R8 along without expending much more effort than you would in a regular car. Not that this spoils the sense of occasion however, because sitting snugly in the R8’s cockpit you are down low compared to other cars, and grasping the small but chunky flat-bottomed steering wheel reminds you of what it is capable of.

Leave it in automatic and stick to the first few centimetres of throttle travel and you could almost forget you’re in a supercar, especially if you leave the button marked ‘Sport’ alone. But that would be a waste, and it takes only a moment to access the more dynamic side of the R8’s personality. Punch that button and the revs flare instantly as the throttle response is sharpened and the gearbox switches into a more aggressive programme. The thing you’ll notice first however is the howl from the exhaust as it opens out completely to give the engine its full voice.

Frankly why you’d have the switch in any other position is beyond me; that V10 delivers such a fantastic range of noises it encourages you to change down very early and hold on to gears for longer just to hear it sing. Squeeze on the throttle in any gear and there’s a hardening of the exhaust note as it begins to accelerate hard. Pin the pedal to the floor and the response is dramatic and instant; third gear is the one to go for, because at first you can’t believe how hard it pulls in a relatively tall gear and then as you reach the red line it’s even more amazing how it keeps on pulling hard way into big speeds. Whatever you ask of it, the V10 Spyder responds emphatically with a mighty push in the back.

Crucially it is friendly and entertaining when you start to push on too. The Quattro drivetrain provides reassurance rather than nannying interference and even if the surface is only fractionally damp you can use the power with much greater freedom. The steering is sharp and responsive but not nervous, although the flat-bottomed wheel takes a little getting used to. No car this fast has a right to be so friendly, but you can lean on the R8 a great deal and forget how much it costs and just revel in the grip, the balance and the knowledge that even if you are a little cack-handed it is on your side.

That the R8 is so responsive and accessible when you press on yet comfortable and unobtrusive when you’re just burbling through town is exactly why you’d buy one. If such all-round brilliance sounds dull, it isn’t; you just get all the thrills but without the headache when you just want to get home. There are younger cars and there are outright faster cars (just), but the one you’ll want to see out of your bedroom window every night is the R8.