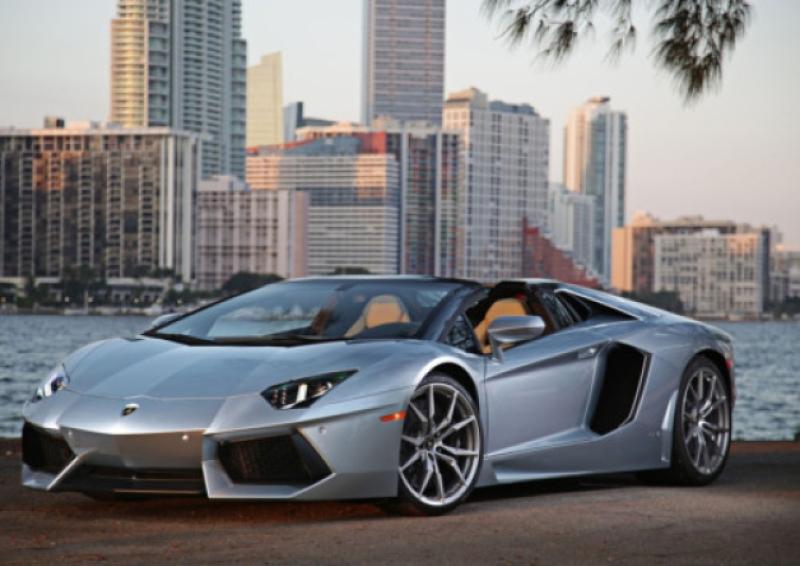 Can you ever have too much of a good thing? There are those who seem pretty confident that there is no such thing as too much.

Can you ever have too much of a good thing? There are those who seem pretty confident that there is no such thing as too much.

How else could you explain the existence of the Lamborghini Aventador Roadster LP700-4; even the name is longer than the Coupé on which it is based. The burning enthusiasm that rages down in Sant’Agata has resulted in a drop-top version of its incredible supercar, which gives you more of pretty much everything.

There’s the looks for starters. The Aventador Coupé is hardly a wallflower, but the Roadster has a few tricks of its own. For starters it has to accommodate some sort of roof mechanism, so at the back where there is normally a slated window there are two hexagonal windows into the engine bay. The roof itself comes in two pieces of carbonfibre, and although at launch they’re coloured matte black other colour options will be available later. To remove them you have to tilt the seat forward, release a catch, pull the panel out of position and stash it in the boot at the front. You could argue that’s a bit of a faff (and you’d be right) but the alternative would compromise the car’s looks, and a fabric roof would not handle 217mph.

Yes, the Aventador Roadster is not a fraction slower than its Coupé counterpart. Under those little windows there is the same satanical 6.5-litre V12 engine that debuted in the fixed-roof version, pumping out a spectacular 691bhp. The roof system also helps keep the weight down; with that plus a little body strengthening the Roadster is a mere 50kg heavier, and as a result it can post 3.0 seconds for the 0-62mph sprint and bash past the 200mph mark. Lamborghini claims that the Roadster posts exactly the same lap times around its test circuit as the Coupé, so you can sleep safe in the knowledge you’ve not compromised yourself around the racetrack in the name of open-air fun.

Unusually for a supercar drive, Lamborghini let us loose around a circuit first before trying the Aventador on the road but it gave us the opportunity to savour the performance in full flow. Idling down the pit lane it’s hard not to be a little intimidated given the huge amount of power and the whopping price tag, but after only a few corners it’s clear to see that it is actually a remarkably friendly device. There’s four-wheel drive spinning away beneath you to keep the power in check, and the Sport and Corse modes (selectable on the centre console) not only alter the operation of the ESP and the gearbox but also the power split between front and rear.

Select the most aggressive Corse mode and the Aventador feels pinned to the track, and allows you to get on the power early out of the bends and simply rocket down the straights. Even in the tighter bends where the weight should count against it the Aventador feels surprisingly nimble too; the steering is packed with feel and the carbonfibre brakes remain strong lap after lap, even slowing down from over 150mph. Switch to the Sport mode and there’s an increased power bias to the rear (90% as opposed to 80%) which makes the tail a little more happy to swing, but even then it is far less demanding to drive than you might imagine. And all the while the glorious V12 is wailing away behind your head, and with the roof up you can still lower the little rear window to allow the incredible sounds to flow more easily into the cabin.

After the track came the road drive, and a quick look at the map revealed just why; Miami may be the playground of the rich and famous but it doesn’t have a twisty road for miles in every direction. However a cruise along Ocean Drive revealed the other reason why you’d want to buy one; people love this car. Some other rival marques might not enjoy the same universal approval that the Aventador got, thanks to its sheer outlandishness. The maximum possible speed on Ocean Drive is about 15mph, but the crowd along the street waved, applauded, wanted their picture taken with it and were calling out for us to rev the engine. One guy raced out into the middle of the road and offered us a free lunch if we parked the Aventador outside his restaurant; that’s the kind of response it provokes.

And that’s exactly why you’d buy one. At almost £300,000 it won’t be your only car and if you have that much to spend you’re unlikely to be much of a wallflower yourself. Its rivals seem a bit plain and straightforward in comparison - this is a proper, outlandish, cartoon-like Lamborghini supercar that can still do the boring stuff too.