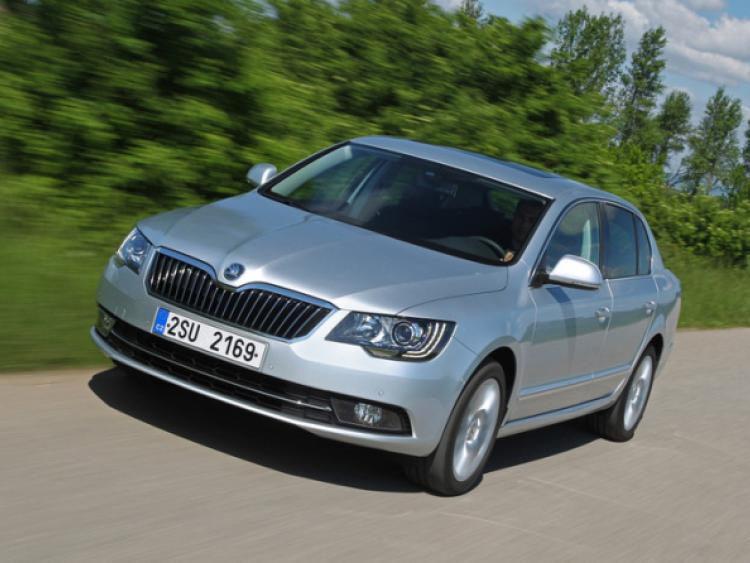 Skoda have used the “Simply Clever” tag line for a number of years now and generally they have lived up to the phrase writes Bob Flavin.

Skoda have used the “Simply Clever” tag line for a number of years now and generally they have lived up to the phrase writes Bob Flavin.

Like the way they put an ice scraper under the fuel filler cap or they way the put an umbrella into the door of the Superb but these are just talking points for the Skoda range because for years the Superb has been the thinking man’s Limousine.

The Superb is so good that Skoda haven’t changed it, this is just a face lift and most of the work is purely cosmetic.

The front headlamps and grill look more like the family Skoda, they’ve changed the rear a little bit adding two buttons to open the twin door boot opening for the saloon.

There’s also an electric tailgate for the Combi that I assume will be an option in Ireland.

Inside they really haven’t changed anything, there’s still acres of space in the cabin and a ridiculous amount of leg room for the rear passengers.

I drove an Audi A8 long wheel base limo last year and that had about the same leg room as a Skoda Superb, the A8 is around €100k and the Superb is a lot less than €30k for a decent spec too.

There’s really only two engines coming to Ireland that you’ll want to buy, the 1.6 TDi and and the 2.0 Tdi and despite the 2.0ltr being the best at motorway cruising the 1.6 does a nicer job at day to day running.

You can also have one of the petrol engines in the line up 1.4, 1.6, 1.8 and the massive 3.6 but really you probably will never see most of them because Ireland and big cars need a diesel.

Having driven all the versions of the new Superb I’ve come to the conclusion that the one I’d buy would be a 1.6 TDi Combi with sat nav, bluetooth and cruise control because it’ll be all the car I’d ever need.

Within the next couple of years we’ll see an all new Superb but I doubt they’ll change it that much from what you see in the pictures because it’s a very decent offering from Skoda.

I am a little disappointed that there’ll be steel wheels on the entry model also missing from the entry version will be the big trade mark umbrella.

That said you’ll want to spec up a bit to the Ambition model, there isn’t a big price difference and you’ll get a half leather interior, alloy wheels and that trademark umbrella as standard.

You’ll find the new Superb in the home of Skoda in County Kildare, Sheehy Motors Naas 045 906600, the new car should be in the showrooms late July.

If you can bring someone to drive you around you can treat yourself to a spin in the back seat.

**The Skoda Superb has been given a mid-life update with restyled front and rear ends, new interior trim and a tweaked engine line-up.

From the A-Pillar forward, the design is all new and brings it into line with newer models like the Rapid and Octavia. A wider grille, the badge and the headlight clusters are all new - the latter features bi-xenon headlights with integrated LED running lights for the first time. Squarer fog lights and a single chrome bar running across the lower air intake are also added, along with a new bonnet and front wings.

At the back, the numberplate has moved upwards, creating a cleaner surface on the rear bumper, while new LED tail lights form a new ‘C’ shaped pattern.