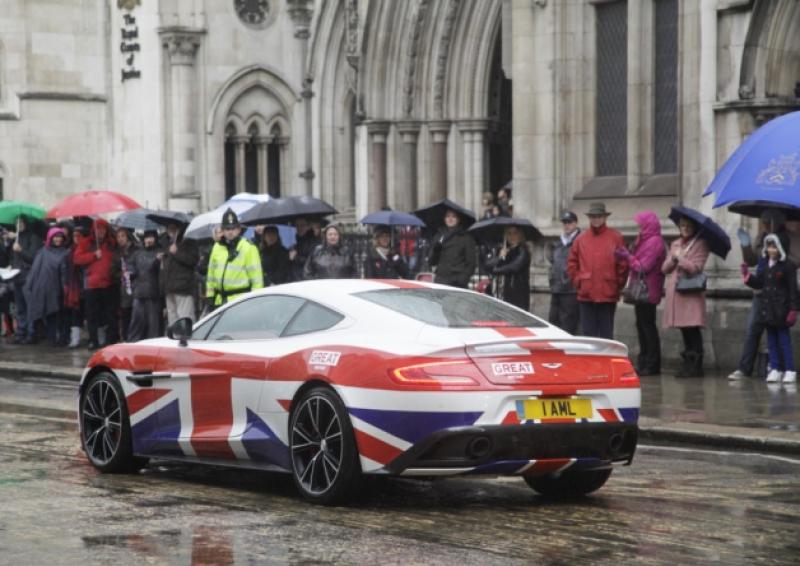 Luxury British sports car maker Aston Martin is celebrating a successful role in one of the world’s most famous parades as six of the company’s models took to the streets of London for the historic pageant that is the Lord Mayor’s Show.

Luxury British sports car maker Aston Martin is celebrating a successful role in one of the world’s most famous parades as six of the company’s models took to the streets of London for the historic pageant that is the Lord Mayor’s Show.

Adding more than a dash of glamour to proceedings, the stunning selection of sought-after sports cars joined the three-and-a-half-mile-long cavalcade at the invitation of The Worshipful Company of Coachmakers and Coach Harness Makers of London which selected the marque to participate in this, the firm’s centenary year.

The Aston Martins, which included a Vanquish Coupe dressed in the unmistakable Union Jack-inspired livery of the UK Government’s GREAT Britain campaign, made their way through the capital’s packed streets at a decidedly stately three miles per hour as an estimated half million spectators looked on.

Aston Martin is proudly partnering with the GREAT Britain campaign, the biggest ever initiative to showcase the very best of what Britain has to offer, driving investment, students and tourism to the UK.

Sharing the limelight in the capital were examples of Aston Martin’s four-door sports car, the luxurious Rapide S, and elegantly timeless GT, the DB9.

Aston Martin Global Brand Communications Director, Janette Green, said: “To see our sports cars taking part in such an historic and famous event as The Lord Mayor’s Show is a special occasion for everyone associated with Aston Martin.

“I would like to thank the Worshipful Company for their kind invitation, and hope all those who saw the cars felt a little of the pride that I know we at Gaydon share in being part of this remarkable event.”

For almost 800 years, since, the time of medieval King John, every newly-elected Lord Mayor of London has to leave the safety of the City of London and travel up the Thames to Westminster to swear loyalty to the Crown.

Over the centuries the Mayor’s journey has become one of London’s favourite rituals, and around it grew the splendid festival that we know today as the Lord Mayor’s Show.

The modern procession fills the space between Bank and Aldwych over a three- to four-hour period, cheered by a crowd of around half a million people and watched live on the BBC by millions more.

The focus on Aston Martin in this year’s event continues the brand’s year-long centenary party that began in London back in January with the unveiling of a plaque in Chelsea’s Henniker Mews – original home of the company that went on to become Aston Martin Lagonda.