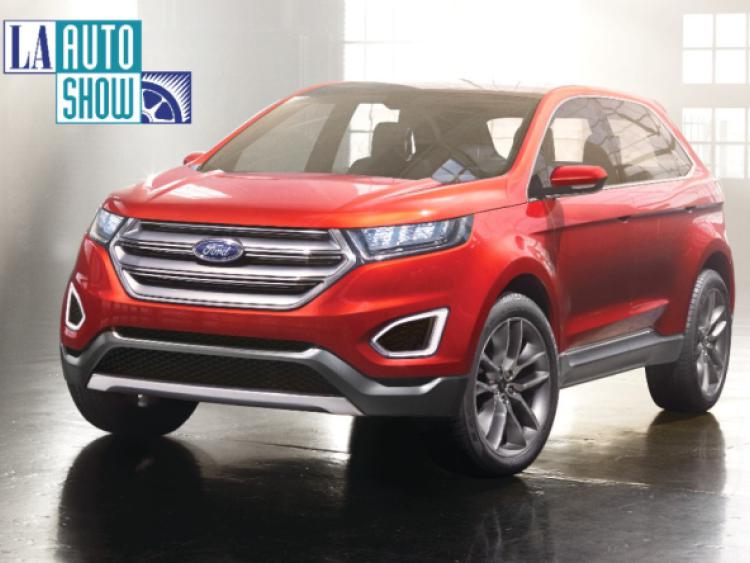 Ford recently revealed the all-new Ford Edge Concept to give a strong indication of the technology, design and craftsmanship direction of the company’s new large SUV for Europe.

Ford recently revealed the all-new Ford Edge Concept to give a strong indication of the technology, design and craftsmanship direction of the company’s new large SUV for Europe.

The Edge Concept also showcases potential advanced technologies, including a push-button and remote-operated parking feature customers could use from inside or outside the vehicle.

Already popular in the U.S. and other markets, the Edge will be Ford’s first large upscale SUV for Europe, one of 25 global vehicles that Ford confirmed last year will go on sale in Europe by 2017. With the Edge, new Kuga and new EcoSport, Ford will offer a comprehensive lineup of redesigned SUVs.

“The original Ford Edge offered customers in North America a fresh, compelling choice for an accommodating, efficient and safe utility vehicle,” said Joe Hinrichs, executive vice president and president of The Americas, Ford Motor Company. “The next-generation Ford Edge – previewed in the Ford Edge Concept – will build on these cornerstones to create a global vehicle with technology to make life easier, and design and craftsmanship to appeal to customers around the globe.”

Revealed at the Los Angeles Auto Show, key attributes of the Ford Edge Concept – a sleek, sporty appearance; capability; fuel efficiency; and technology that assists the driver – are in line with what customers value around the world, which is driving global growth in the SUV segment.

In Europe, where higher specification models currently account for 70 per cent of all Ford S‑MAX sales, the Edge will meet demand for upscale, technologically advanced SUVs with great road presence and driving dynamics. SUVs in the region grew from 6.5 per cent to 11.9 per cent of vehicle sales between 2005 and 2012, and Ford projects that between 2013 and 2018 sales of all SUVs in Europe will increase by 22 per cent.

Driver-assist technologies and semi-automated features in Ford Edge Concept hint at a future offering even more intelligent and capable vehicles from Ford. These sensor-based technologies form the building blocks for the future of automated driving, and will help make driving safer and more efficient.

Fully Assisted Parking Aid, a prototype technology which builds on Ford’s Active Park Assist feature to let customers park their vehicles at the touch of a button, or even by remote control. The system can find a perpendicular parking space using ultrasonic sensors and allows customers to wait until the vehicle has pulled out of a tight parking spot before entering.

Ford also has begun a research project designed to refine advanced Obstacle Avoidance systems. The research and development vehicle can issue warnings if it detects slow-moving objects or stationary obstacles in the same lane ahead and – if the driver fails to steer or brake following warnings – the system automatically steers and brake the vehicle to avoid a collision.

The new Ford Edge Concept exterior is carefully sculpted, fluid and athletic. Strong shoulders add to the feel and appearance of a runner in the starting blocks; the rearward slope of the grille influences the shape of the bonnet, which is both muscular and more compact.

The Edge Concept has a new high-tech application of Active Grille Shutters. The shutters automatically open and close to maintain ideal engine operating temperature and maximise aerodynamic efficiency. Unique air curtains on the lower part of the fascia guide air from the front of the vehicle, out through the front wheel wells and down the side of the vehicle.