Audi A8 has class and style 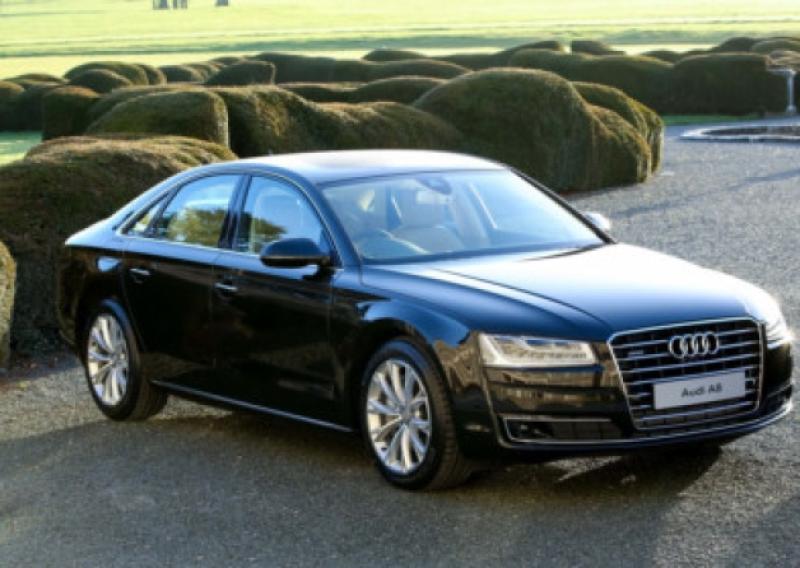 These cars are much more limousines than cars that you drive yourself in, these are the kind of cars you see on the news when some EU minister is visiting Brussels.

The Audi A8 has a movie past too, most people of my generation will remember the S8 being the car used in one of the all time greatest car chases, Ronin.

If you haven’t seen this movie go now and seek it out. There’s also the Transporter movies where Jason Statham kicks lumps out of everyone while driving like he’s in the Dukes of Hazzard.

These movie appearances have done no harm to the sporty image of both Audi and the A8 because it’s held up as the sporty limo.

It isn’t sporty, it’s not meant to be. It’s designed to bring you to where you want to be in comfort, style and executive class. There’s a long wheel base version that really is made for the people in the back, footrests and big comfy armchair seats are the order of the day.

The normal wheel base version is still big but is focused more towards the driver, this is the kind of car a Hotel buys for transfers to the Airport. It sure does make a statement but it stops short of being brash.

There’s a lot of tech that you can have in the A8, from radar cruise control to 3D sat nav but the important stuff but by far the most impressive option is the LED lights. These lights actually go from full beam to dip and back again and you don’t have to do anything.

It ‘sees’ other lights on the road and reacts to them, as a car approaches the light dips and bends around the other car so no one gets dazzled and then the lights go back to full white beam.

You can see for miles with the brightness safe in the knowledge that you won’t be blinding oncoming traffic, the LED lights are standard.

Another standard is the adaptive air suspension which cushions out the road like no other, you feel very little from the road surface even over some of the crazy speed bumps we have in Ireland none of which are the same height.

Everything is easy even when you have to drive on grass at the press of a button you can raise the car up giving more ground clearance. With quattro as standard there’s very little the A8 can’t do in any weather or any terrain.

The prices for the A8 range start at €93,280 and for that there’s loads of kit as standard but for comfort I’d add a few options like double glazing, Bose surround sound, power doors and if you’ll be spending time in the back 4 zone climate control with metallic paint which makes the price €100,524 but for that you’ll have all the car you’ll ever need or want with a 3.0ltr diesel and 260bhp right in tax band C €390 a year which is less than my 1.6 petrol!

Consumption figures are good too, I got what Audi says you’ll get 5.9ltrs which is almost 40mpg and you’ll do better than that if you leave the car in efficiency mode. With finance going the way it’s going now you should be able to afford this car, while it’s still beyond most of us, me included, one can always dream.