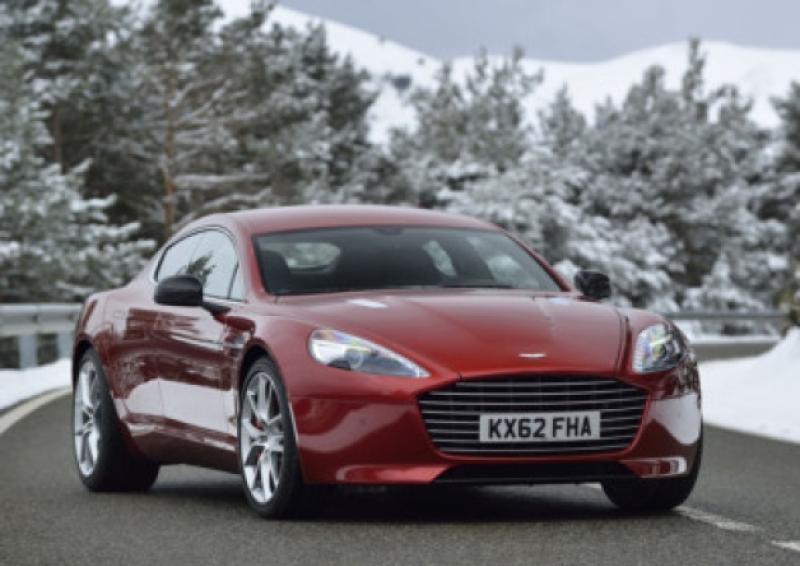 You get nowhere by standing still, especially not in the car-making game.

You get nowhere by standing still, especially not in the car-making game.

And Aston Martin, an icon of British style and performance, is going all out in its centenary year; the whole range has either been refreshed or is brand new. The latest model to get the treatment is the Rapide.

First introduced in 2010, it has now turned into the Rapide S. It’s easy to tell apart from the outgoing car by virtue of its much more prominent grille.

As well as echoing that of the blockbusting One-77 hypercar, the bigger grille gives the Rapide S more presence, and thanks to some clever engineering also improves its pedestrian impact performance to boot.

Elsewhere, the Rapide S gains a discreet rear spoiler to balance the bigger front splitter, and there is a choice of a new 19in wheel design too.

These are relatively minor visual tweaks for what was already a stunning piece of design. The stretched proportions of the Rapide may seem exaggerated at first but no other rival seamlessly blends an extra pair of doors into a coupe shape.

There are mechanical enhancements too, with the Rapide S gaining the new AM11 spec V12 engine already seen in the new Vanquish.

Admittedly, it has slightly less power than in that installation, but the output is anything but small; 550bhp, a full 80bhp more than the previous Rapide.

As before, drive is taken to the rear wheels through the six-speed Touchtronic transmission that offers automatic, sport and manual modes.

The Rapide S also benefits from a revised suspension set-up, with new specification dampers tailored to its demanding requirements.

But even with this 190mph four-door GT, you start slowly. Slide into the driver’s seat and the cabin is a familiar blend of tasteful design and lush materials.

If it’s not leather or chrome, then you don’t need to touch it, and although there are few changes from the previous Rapide, it is a layout that works well, particularly thanks to the improved satnav system.

You still have to perform the deliberate starting ritual, slotting the sapphire glass ‘key’ into the slot before the mighty V12 fires up.

A punch of the D button on the dashboard and with a squeeze of the throttle, the automatic handbrake releases.

In the first few hundred yards a number of things become immediately apparently.

Firstly, the increase in power and torque has made the Rapide S exceptionally effortless to drive at normal speeds.

In the standard mode, the long travel throttle allows careful applications of performance but you never need very much to gather speed comfortably.

On the other hand, punch the Sport button and the throttle is sharper, giving you access to all that grunt even more easily.

The next thing is how impressively the revised suspension performs.

Aston Martins have always managed that most difficult of tricks, blending a ride comfortable enough for long distances but without sacrificing handling, but the Rapide S takes it even further.

Helped by being the longest car to come from the company, it is remarkably supple and fuss-free, yet never floats or feels anything other than well tied down over bumps.

Hit the damper button once and you switch into Sport, and even on lesser Spanish roads it still rode with deeply impressive composure.

There’s even a Track mode if you hold down the damper button for a few seconds, and while that proved a little too stiff on smoother surfaces, it refuses to be upset by bumps.

And yet when you sharpen the Rapide S up for a challenging set of bends, it is more than up for it.

Regardless of the suspension mode, it is composed, diving between bends with remarkable ease and managing to shrink around you; from the driver’s seat you would have no idea that there were two seats and a sizeable boot behind you.

The steering offers plenty of feel but isn’t hyperactive at a cruise, and the brakes are strong even after repeated hard use.

Best of all you can have two friends in the back to enjoy the ride. Those rear seats are sculpted buckets more than the kind of flat chair you get in a normal car, and the big transmission tunnel through the centre of the car is turned to its advantage, providing an ideal location for the rear air conditioning controls and a natural divider of the space.

The Rapide S is undoubtedly competing in a rarefied sector, but that just means that the standards are exceptionally high.

Yet this latest Aston takes the already-impressive Rapide and moves it to another level. No competitor can offer quite the same blend of performance, composure, comfort and elegance.