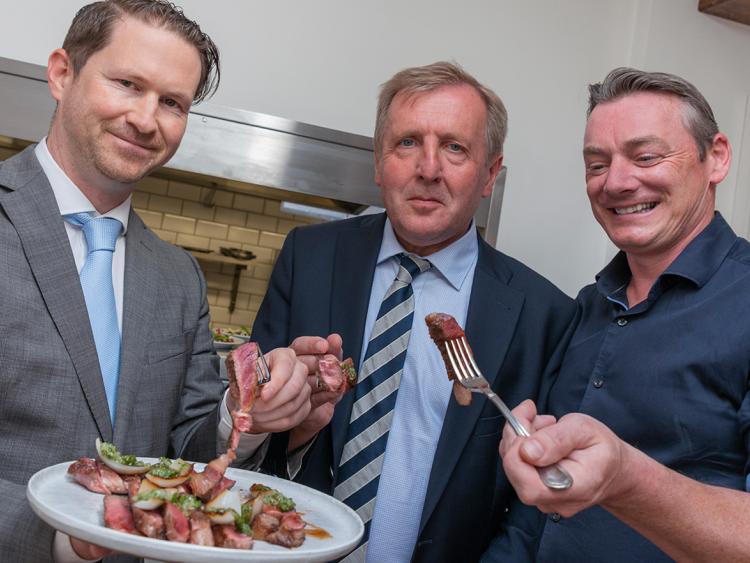 Minister for Agriculture, Food and the Marine, Michael Creed TD (centre) with Gavin Dunne (left), founder of The Olive Feed Corporation and his co-founder, Bryan Dunne on whose farm the beef is bred

An Offaly farm - situated at Millmount, Monasteroris, Edenderry - is at the forefront of what is proving to be one of the most innovate advances in the development of livestock feed ever undertaken in Ireland or elsewhere.

There, on the 80-acres farm, a herd of highly valued Wagyu cattle is the first in Ireland to be fed on a new, natural livestock feed supplement formulated from fresh olives under the management of its owner - environmental scientist and farmer Bryan Dunne.

The feed supplement, brainchild of Gavin Dunne - Dublin-born entrepreneur, businessman and co-founder with Bryan Dunne (no relation) of The Olive Feed Corporation - is being produced in Greece using fresh olive pomace constituted from the surplus skin and flesh left after the valuable olive oil has been extracted - all of it sourced from olive groves in the Corfu and Kalamata regions.

Popular in Japan and across the Far East and Australia, and now increasingly available in Ireland and Europe - Wagyu beef is characterised by its intense marbling distributed evenly throughout the cut.

Recently, Minister for Agriculture, Food and the Marine, Michael Creed TD was guest of The Olive Feed Corporation at a tasting organised for food writers in Dublin’s Clanbrassil House restaurant. There, under the direction of head chef, Grainne O’Keefe, the Minister and guests variously commented on what they said is its ‘tender, succulent qualities and its distinct and attractive flavour’.

The 10-strong herd, who’s beef will be marketed under the brand name ‘Millmount Wagyu’, is being farmed by Bryan Dunne from pure-bred embryos and semen imported from Australia and implanted in Simmental cows.

Dunne said that his plan is to reduce his involvement in suckler stock while placing correspondingly greater emphasis on building up his Wagyu herd.

“Our goal will be to kill at least one olive-fed animal per week, increasing as demand for its meat grows” he said. “Another priority will be to build towards the goal of having 15 top-end breeding cows. We also plan to acquire a breeding bull, probably from USA, providing we can be certain of getting the genetics right” he added.

Longer term, his plan will be to encourage other local farmers to introduce Wagyu into their herds. In addition, his sights are also set on forging close links with other Wagyu breeders in order to collaborate on matters relating to genetics and the development of feedlot stock.

Under the management of its founder, Gavin Dunne, production of the new feed is being carried out on behalf of The Olive Feed Corporation in the Greek seaport town of Nafplio.

Used to supplement up to 25% of a Wagyu animal’s feed diet over the four months before slaughter, some 150 tonnes of the Olive Feed Corporation’s feedstuff have already been produced, with a second production run set to commence in November, continuing until June next.

With almost unlimited production capacity, governed only by seasonal production of olive oil, orders are being shipped to USA, Australia, Holland and Italy, in addition to amounts being sent to Edenderry.

Recognising its ultimate potential, studies are also being conducted at Millmount to determine the potential that Irish-bred Wagyu beef, fed on the new compound, could have in export markets.

Also being examined is the contribution Ireland could make towards spearheading the commercialisation of this type of beef in Europe, and the potential that exists to introduce the feed to other livestock breeds, Aberdeen Angus and Holstein Friesian cross being the prime examples.

Conscious of what he termed the ‘growing consumer demand’ for Wagyu beef internationally, and the premium price it attracts in restaurants and butcher shops, Gavin Dunne joined with Minister Creed in urging farmers and beef producers generally ‘to take account of the very significant opportunity that this new beef product represents.’

“Having taken part with the Minister in trade missions to China, Japan and Korea, The Olive Feed Corporation is working with Bord Bia towards the achievement of that goal” Dunne said.