WATCH: 'Chaos' at Tullamore's Covid testing centre as traffic backs up for miles 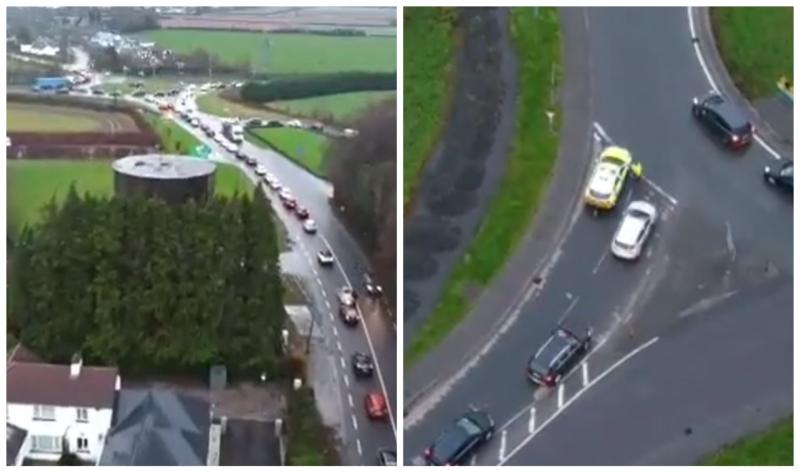 WATCH: 'Chaos' at Tullamore's Covid testing centre as traffic backs up for miles

People travelling to Tullamore for a Covid-19 PCR test have experienced incredible delays over the last few days.

The issue came to a head on Thursday when queues backed up for miles on all approach roads, causing traffic chaos for locals.

Social Democrats councillor in Offaly, Clare Claffey, has called on the HSE to increase capacity at the test centre in Tullamore after she was waiting nearly two hours for a PCR test for her son on Thursday afternoon.

The queue for the test centre began at the Clonminch roundabout causing traffic to be backed up at all exits of the roundabout. Gardaí attempted to control the flow of traffic on Thursday afternoon.

"It was chaos, nothing was moving, better traffic management is needed," Cllr Claffey said.

"A huge amount of people were queuing to be tested, fair play to the staff who are doing a great job under these conditions. While the wait was long, I have to consider myself lucky to get an appointment; the vast majority of people don't seem to be able to access PCR tests at the moment and some people from Offaly are having to travel outside the county for a test."

"Currently, a positive PCR is required to access the covid illness benefit and while the changes announced last night to the PCR testing requirements may free up some testing capacity, what we really need is either a change that allows a positive antigen test to be accepted as a true positive, without the need for a PCR, or else vastly increased PCR testing capacity while we deal with the omicron wave."

PCR test appointments are unavailable throughout the country after being fully booked every day this week.

Testing advice has been changed from seeking a PCR test with symptoms to using antigen testing at home.

Those who test positive with an antigen test should seek a PCR test to confirm the result.

Self-isolating advice for those who test positive for Covid-19 has also changed.

Those aged 12 and over, who have had their booster vaccine jabs for at least seven days, should self-isolate for seven days instead of the previous advice of 10 days.

Mr Donnelly said transmission is continuing to rapidly increase in Ireland and daily case numbers are substantially exceeding the highest previously reported in the pandemic to date.

“We are seeing levels of new daily cases in hospital that we have not seen since last January.

“While our booster rollout programme is going extremely well, the extent to which the epidemic is continuing to accelerate means that there is still significant concern regarding the likely impact of such high case counts on our health services.”

He has urged the public to “layer up” protective measures including wearing face coverings, good ventilation and antigen testing.

Dr Holohan urged people to keep their social contacts low in the days ahead. He has also said it is not safe for people to meet in numbers on New Year's Eve.

He said the variant Omicron accounts for more than 90% of Covid-19 cases in Ireland.

“The most effective way to minimise the risk of any of us transmitting this virus to others is to avoid mixing indoors with people from other households,” he said.

“I know this is not the advice any one of us wants to hear, particularly in advance of New Year celebrations.

“However, given the current profile of the disease, it is essential that all of us continue to keep our social contacts as low as possible in the days ahead.

“In the last 24 hours, 148 people with Covid-19 were either admitted to hospital or received a ‘detected’ test result while in hospital.

“Hospitalisations at this level are not sustainable and are having a significant impact on our health service.”

“To date, over two million people have received their booster, without this very significant uptake, the current impact on hospitalisation would be considerably worse,” he said.

There is currently no queue for a walk-in booster vaccine for those aged over 30 at the Offaly vaccination centre in Mucklagh.