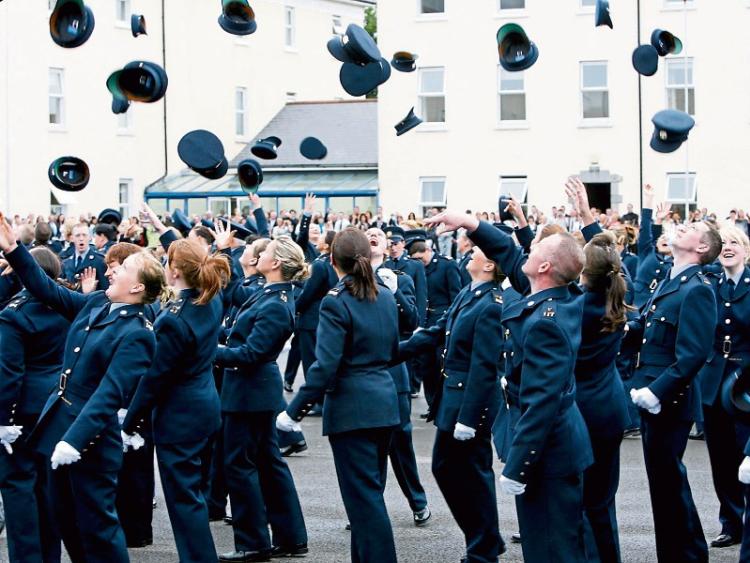 Passing out day at the Garda College in Templemore.

The Minister for Justice has encouraged young men and women from his own part of Ireland to apply to join An Garda Síochána as he launched the new recruitment drive..

The TD hoped that that local people apply to build careers in policing.

“As to those who start thinking about applying today - I hope many from the Midlands will be among them because those who succeed will be joining a police service that we’re all particularly proud of...If you succeed, you will be joining many others on an exciting path,” he said.

Minister Flanagan said the recruitment was part of a Government aim.

“To give effect to the Government’s commitment to increase the strength of An Garda Síochána to 15,000 members by 2021, the Garda Commissioner has asked the Public Appointments Service to run a new Garda recruitment campaign.

The Minister said a career in An Garda Síochána is a rewarding one of public service with members making a vital contribution to the safety and well-being of the communities they serve on a daily basis.

He said over 800  trainees are starting in Templemore 2018. Some are there already - having begun in either January or April, others will start in either July or October of this year.

“I encourage all those interested in supporting the mission of An Garda Síochána to protect and serve to access the website of the Public Appointments Service (PAS) and submit their application at www.publicjobs.ie.

“It is important that An Garda Síochána is reflective of the communities it serves and protects and I urge members of minority and new communities to consider applying to this and future recruitment competitions.

“In recognition of the training undertaken by Reserve members and the contribution they make to policing communities right across the country, the new campaign will again, in addition to an Irish language stream, include a special stream for eligible members of the Garda Reserve who give their time on a voluntary basis to support the work of An Garda Síochána.”

Minister Flanagan said that a damaging legacy of the economic recession was a reduction in Garda numbers and the closure of the Garda College.

Since the College was reopened in September 2014, almost 1,770 recruits have attested as members of An Garda Síochána and have been assigned to communities nationwide. Another 600 recruits are due to attest later this year which will bring Garda numbers to 14,000, ensuring that the target of 15,000 by 2021 is well on track to be achieved.”

Taking account of projected retirements, reaching a strength of 15,000 by 2021 will require some 1,600 more Garda members to be recruited on a phased basis over the next two years and the Government’s ambitious programme of accelerated recruitment will require a continuous pipeline of suitable candidates.

It is expected that successful candidates from the new campaign will enter the Garda College from quarter 2 in 2019.

“I'm very pleased that this latest recruitment campaign is starting today (May 17).  I'm sure we will get many applications by the deadline on June 6th and I want to wish everyone who applies the best of luck in this competition,” said Miniser Flanagan.

Apart from the application, there are three stages to the recruitment process. Applicants will be informed whether they will be accepted for training after an interview and other assessments are completed in September 2018.

Garda Trainees will receive an allowance of €184 per week for the 32 weeks leading to attestation. Accommodation and food is provided by the Garda College.

Garda Trainees attest after 32 weeks and move onto the first point of the Garda incremental pay scale of €29,699. The incremental scale rises to €48,271 per annum after 8 years with two further increments after 13 and 19 years' service which bring the maximum of the pay scale to €51,963 per annum after 19 years (January 2018 rates).

Other allowances may also be payable, including for unsocial hours, as may overtime.