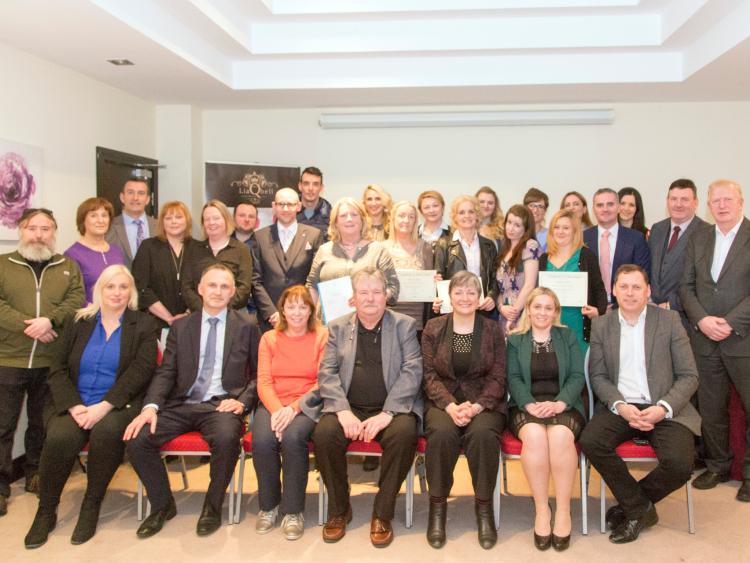 The latest round of graduates from the Offaly Local Development Company's Business Development Programme presented their ideas to a distinguished audience of specially invited guests in the Central Hotel, Tullamore, last week.

The course, which is celebrating its nineteenth year of arming budding entrepreneurs with the necessary know-how to bring their ideas from the 'looks-good-on-paper' stage to the 'looks-good-in-real-life' stage, certainly fulfilled that goal this year, as a buzz of excitement filled the venue from early morning and well into the afternoon.

Businesses on display included delicious season-specific vegetarian food, magnificent fashion designs, inspiring original abstract art and award-winning hair-stylists. With such talent on show, it's little wonder that course-coordinator Carmel Ormond, and so many of the event's special guests, were full of praise for the level of diversity on offer.

"The first thing we always focus on when we meet with potential entrepreneurs," revealed Ms. Ormond, "is whether or not their idea is viable."

"Without an idea which has that seed of possibility in it, howsoever small to begin with, there's nothing to work on developing. But we don't expect people to have fully-formed ideas or to come into us knowing everything about how to take their ideas from one step to the next. That's why we're here. That's what this course is all about, helping people to take that journey. We work on helping people to turn those seeds of possibility into the seeds of success."

Ms. Ormond continued, "And on days like this, when we can look around us and see how so many of this year's course participants have taken their original ideas all the way from what they started off with when they met with us first, saying, 'Well, I have this idea...!', to here today, where those ideas have bloomed into young businesses that have so much potential for success in each one of them, it's brilliant to see."

"And the diversity displayed too, is something worth noting. And for two important reasons; because it demonstrates the degree of creativity which exists within the county, but also because it's a sign to anyone out there who has an idea that they might think is a bit too left-of-centre to even try, don't think like that. What it's about is whether or not you can make it work, not necessarily whether or not it's been done before."

In attendance on the day, and an indication of the importance with which the Business Development Course is viewed, were all three of Offaly's elected representatives in Leinster House; Marcella Corcoran-Kennedy TD of Fine Gael, Barry Cowen TD of Fianna Fail, and Carol Nolan TD of Sinn Fein, as well as a number of County Councillors including Renua party leader John Leahy.

All three TDs spoke of how the fire of entrepreneurship had always been, and remained vital to any thriving and dynamic economy, and were fulsome and sincere both in their praise for what the course participants had already achieved and in wishing them well for the future.

As well as the aforementioned course-coordinator Carmel Ormond, Brendan O' Loughlin, the C.E.O. of the Offaly Local Development Company, and Eamon Guilfoyle from the Department of Social Protection, also addressed the room and congratulated all the course participants on their achievements to date.

If last week's presentation was anything to go buy, then there's certainly a bright future ahead for entrepreneurship in Offaly.