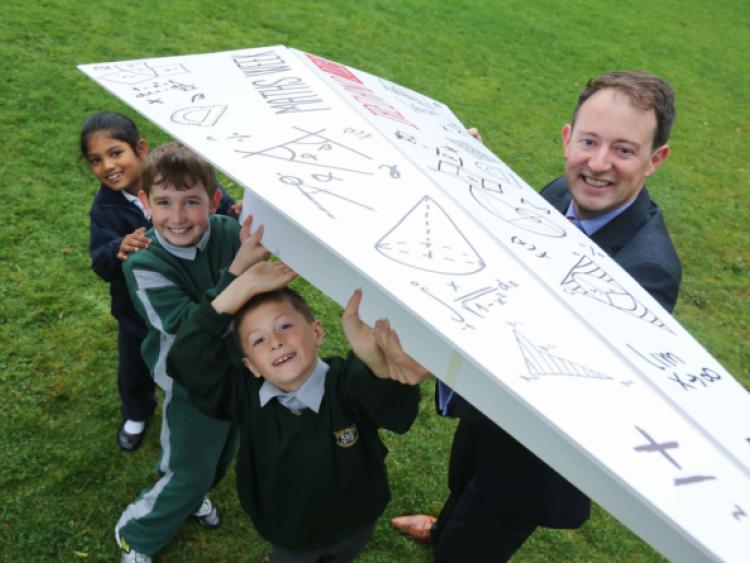 Over 350 primary and secondary school students from Offaly will take part in Maths Week events in their schools from October 12 to October 20.

Over 350 primary and secondary school students from Offaly will take part in Maths Week events in their schools from October 12 to October 20.

Nationally more than 150,000 people are expected to participate in events during Maths Week 2013. Maths Week is an annual all-island festival aimed at promoting maths for everyone. It was developed and is coordinated by Calmast, the award winning centre at Waterford Institute of Technology. The week will see world-renowned Maths presenters flock to Ireland to join local mathematicians in the biggest festival of its kind in the world.

Over 200 events are being organized across the island, with many being hosted by Maths Week partners including Universities, Institutes of Technology and employers. National and international mathematicians will bring maths to life for people of all ages through maths games, teasers, challenges and magic maths shows. For those who can’t make it to an event, activities will also be available on www.mathsweek.ie

Speaking at the launch of Maths Week Ireland 2013, Minister of State for Innovation and Research, Sean Sherlock T.D. said, “Maths is a vital skill for every one of us. As an economy, it’s critical that we encourage young people to try hard at maths and to understand the importance of maths in opening up a wide range of career opportunities. Maths is also important in our everyday lives. I am delighted to support Maths Week as a great way of changing public perception of maths and increasing our mathematical literacy. I’d encourage everyone, young and not so young, to come along to one of the Maths Week events”.

Eoin Gill, Maths Week Ireland Coordinator, WIT commented, “We are delighted to launch the eighth Maths Week. Thanks to the great enthusiasm of partners, teachers and pupils all around the island Maths Week Ireland is now the leading festival of its kind in the world. It is a great example of what we can be achieved in Ireland when groups work together pursuing a common interest.”

“During the week we hope to help people of all ages to understand how helpful a good understanding of maths can be in their everyday lives. People often have a notion that their brain isn’t configured for maths. Once they believe that, it is hard for them to flourish. The reality is that while not everyone can score an A1 in Higher Level Maths, everyone can succeed at maths if we have a more positive attitude. Maths Week has something for all levels .”

Co-ordinated by Calmast at Waterford Institute of Technology, Maths Week Ireland is run as a partnership of over 50 public and private sector institutions and groups, including the universities and institutes of technology, professional bodies, libraries and visitor centres who are committed to promoting an interest in mathematics, as well as many of Ireland’s flagship employers. It is an all-island event north and south.