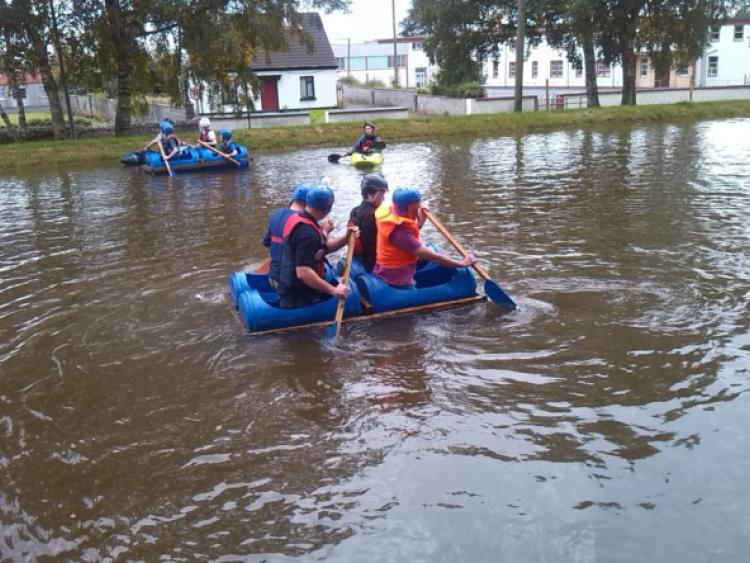 Activities on Saturday morning and early afternoon focused on the spurs line at St Brigid’s Place with the boat crews enjoying Tullamore hospitality and meeting the locals.

Following the open coffee morning on the canal bank, Tullamore Canoe Club took to the water with some fine displays of canoeing. They provided a safe opportunity for kids and adults to experience the canal with accompanied trips on their Canadian canoes and for the more adventurist a chance to try kayaking. Look out for the clubs open days next spring to avail of a similar opportunity.

The Saoirse ar an Uisce trip barge was busy over the two mornings allowing locals the opportunity to experience travelling on the Canal and through Boland Lock passing the wonderful Boland Lock house, the good news is that they can still be booked for trips this Autumn.

Donal took the audience through the development of both the Grand Canal and the Irish Sea as a commercial entity in relation to the transportation of goods and passengers. He recounted how in the early part of the 19th Century, the Grand Canal played a vital role as a link in the Waterways of Ireland, joining the Shannon and the Irish Sea at the time of the steam powered boats coming of age. The development of the steamboats resulted in them being brought into Killaloe in kit form and assembled to serve the routes from Killaloe to Shannon Harbour, from there, goods were transferred for transportation on the Grand Canal via horse drawn barge to Dublin, where again they were transferred to steam boat for onward journey to Liverpool. Donal weaved into his talk how the regulated transportation system combined with the art of storytelling and verbal communication lead to an informal but expeditious communication network developed in parallel with the developing use of the infrastructure, whereby news from Limerick could be in Liverpool the following day or so.

A presentation to the original Offaly 3 Anniversaries 2004 Committee followed the talk along with the announcement of the Slieve Bloom photography competition winner, after which boats crews and guests retired to the bar to watch the hurling final and enjoy a Barbeque kindly supported by Hugh Lynch’s.

Sunday morning saw the boats reflecting splendid sunshine as the teams and spectators gathered for the Ballycommon Canal Renewal Group Raft Race which was held on the harbour side of Bury Bridge. The race was open to teams of 4 and saw 10 teams entered, including a number of mixed, ladies, and men’s and kids teams. The competition was fierce as teams battled for the chance to get a bye into next week’s grand finals to be held in Ballycommon on Saturday afternoon. With the water safety provided by Tullamore Canoe Club all went well although there were one or two wet competitors at the end. Various heats resulted at one stage in the Offaly Hammers verses Sister Act - a bit of a family affair, ladies versus their partners, overall the semi-finals and final resulted in Kilmurray Ducks winning the junior section and the Rubber Ducks going through as senior section winners. Both entries will compete in the Ballycommon event next weekend, the overall final of the raft race.

Members of the Organisation of National Ex-Servicemen & Women (ONE) (Óglaigh Náisiúnta Na hÉireann Teoranta who were in attendance at their national conference also called down to the Canal to view the boatss and meet their skippers and crews.

Later in the afternoon, water gave way to diesel power as the Offaly IWAI working Bollinder engine was started and demonstrated by retired bargeman Andy Maloney. Andy talked the crowd through the workings of the Bolinder which was synonymous with barges in the 1930’s and had a very special starting ritual and engine sound.

Marcella Corcoran Kennedy TD visited the festival during the afternoon and after Andy’s engine demonstration met some of the visiting boaters from Northern Ireland, Dublin, Kildare, Carlow and Meath and Italy.

The overall feedback from the visiting boaters was one that of having had a great experience in Tullamore with the varied events and welcome from the town with a commitment to return next year. Offaly IWAI conducted a survey with the visiting skippers on their experience getting to Tullamore by boat and during their stay, the results will be published and shared with Waterways Ireland, Offaly County Council and Tullamore Chambers of Commerce.

Planning for next year’s festival will begin shortly and Offaly IWAI expect to build on it further with the support and collaboration from the many community groups and businesses.