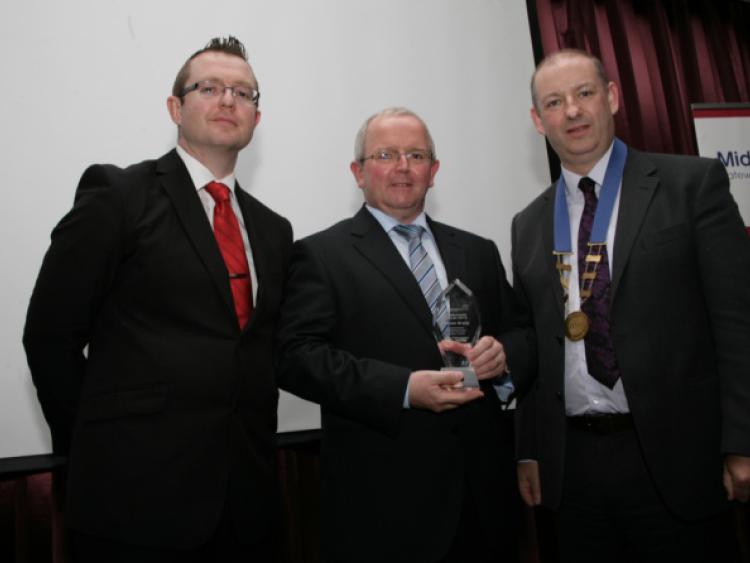 The MidlandsIreland.ie Best in Business Awards were held in The Tullamore Court Hotel on Friday evening last, June 28.

The MidlandsIreland.ie Best in Business Awards were held in The Tullamore Court Hotel on Friday evening last, June 28.

Guests were welcomed by a drinks reception, sponsored by Tullamore Dew which gave business people from across the Midlands an excellent Networking opportunity.

He commented, “Let’s be honest about it, business in today’s environment is tough. Taking the decision to start up a business is one of the hardest choices a person can make; it takes a certain type of person to take that initial leap of faith to start a business, for someone to be successful in that venture is a completely different story and encompasses personal qualities only those in business and their families can understand,” before quoting a famous quote, “The only place where success comes before work is in the dictionary.”

He pointed out the importance of using the expertise of local Chambers of Commerce members, particularly in current economic circumstances. He welcomed all sponsors and finalists to the event and thanked them for their contribution to making the whole night possible.

Cllr. Fintan Cooney, Chairperson Midland Regional Authority addressed the audience stressing the importance of the ‘MidlandsIreland.ie’ which is our brand.

The awards ceremony got under way with Mr. Will Faulkner, Midlands Radio as Master of Ceremonies.

The next award of the evening was Best Multi-National Business Award, kindly sponsored by the IDA. Ms. Breda O’Toole, IDA Midlands Regional Manager presented the award to Vincent Cox representing Cameron Ireland. The other finalist in this category was Abbott Diagnostics.

The Best Cultural Tourism Award was presented to Birr Castle Demesne by Cllr Fintan Cooney representing CHARTS. CHARTS is a Regional initiative co-financed by the European Regional Development to promote culture, heritage and landscape tourism. The other finalists in this category who were highly commended were Ballinahown Craft Village and Clara Bog Visitor Centre.

The winner of the Green Initiative Award was Cynar Plc., the award was presented by Mr. Paddy Rowland, Bord Na Mona’s Corporate Communications Manager. The other finalists in this category were KMK Metals and Polar Ice Tech Ltd.

The Retail Excellence Award, kindly sponsored by The Bridge Centre, Dolans Pharmacy and Guy Clothing, Tullamore, was presented to the winners Red Earth Mullingar. The other finalists in this category were Leavys Centra, Tullamore and Telfords, Portlaoise.

The Outstanding Business Award, kindly sponsored by Glenisk was next with winners Green Farm Foods taking the award to Rathowen, Co. Westmeath. The other finalists in this category were Midlands 103 and the Flat Bread Company.

The Life Time Achievement Award was kindly sponsored by the Element Power Ireland and Mr. Tim Cowhig, CEO presented the award to the astonished winner Mr. Trevor Brown, Irish Casings. Trevor has given many years’ service to Irish Casings in Tullamore where he settled since early 1970’s. Trevor was joined on the night by many family members and friends.

The Midlands Ambassador of the Year award was kindly sponsored by Tullamore Dew. The winner of the award, Mr. Conor Brady, unfortunately couldn’t be there in person to accept the award as he is travelling in Canada. Conor had previously held roles as editor of the Irish Times and the Sunday Tribune. Will Faulkner caught up with Conor earlier in the evening by Skype and recorded a message of thanks from Conor. Conor was appreciative of the award particularly to be acknowledged for the work of a ‘media person’ in the Midlands region. He emphasized all the Midlands had to offer and how we must continue to be proud of our area and promote it, particularly for Tourism. Conor stressed how he was looking forward to working as Ambassador for the Midlands region in the coming year. Conor’s award was accepted by Mr. Pat Gallagher, Offaly County Manager on his behalf.

Mr. Will Faulkner invited John Perry, TD, Minister for State for Small Business to the stage to speak to the audience. Minister Perry congratulated all involved with the organisation of such an event and said how delighted he was to join in celebrating all that is good in business in the Midlands. He remarked, “Awards like these are important. They are important because they give well deserved recognition to the entrepreneurial efforts of the men and women running locally traded companies. They also showcase to the public the hard work, drive, commitment and innovation of those involved in the regional business community”.

In thanking Minister Perry for attending the awards, Ms. Anne Starling, President Tullamore Chamber of Commerce, presented him with a personalised bottle of Tullamore Dew.

MC Will Faulkner wrapped up the formalities by thanking all who made the evening possible and introducing Bernard and Patrice Coyle on stage to entertain.