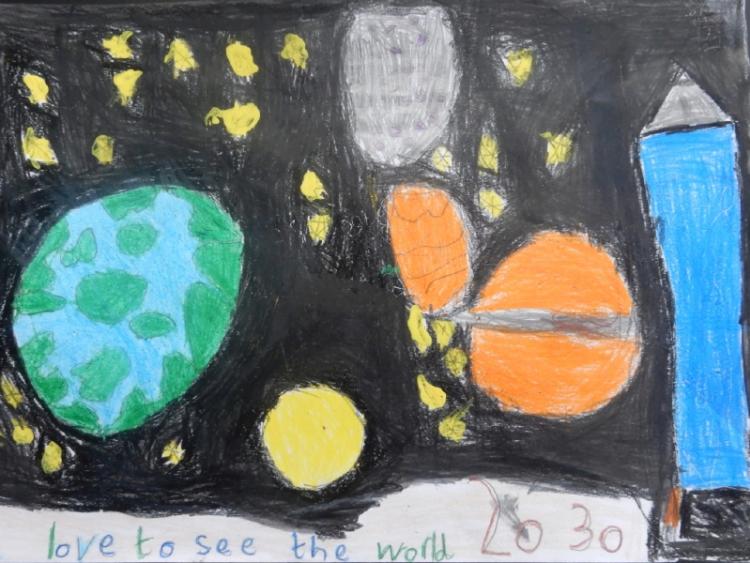 Reuben Von Mollendorff from Charleville National School in Tullamorehas been chosen as one of Ireland’s best young painters for his entry to the Sightsavers Junior Painters of the Year Awards 2016.

Reuben’s painting entitled ‘I love to see the world in 2030’ was inspired by this year’s theme ‘Imagine 2030’ and is a regional winner in the Special Needs category.

Competition was as tough as ever with thousands of children from over 200 primary schools across the country entering this hugely popular annual art competition. Reuben is one of the 15 finalists chosen to have their painting displayed at an awards ceremony in Dublin in early April where the overall national winners will be announced.

Reuben receives a special regional prize from sponsor ReCreate Ireland in recognition of his amazing achievement.

The Sightsavers Junior Painter of the Year Awards is designed to inspire Irish children to express their artistic talent through painting whilst developing an appreciation of the importance and value of their sight. The nationwide competition, which was open to primary school students of all ages, has grown over the last seven years, and the 2016 competition has been highly contested with thousands of entries.

Through the competition, children learned about Sightsavers’ important work in preventing avoidable blindness and restoring sight for millions in the developing world. Drawing inspiration from this year’s theme, ‘Imagine 2030’, which asked students to create an artwork that shows how they think the world they live in will look in the year 2030, there was a high level of sophistication in the entries. Even the infant classes painted their future homes, showing how much thought the children put in to their work. Topics from entrants included:

· Future cities both bleakly dense and fantastically floating, with flying cars on the horizons;

· Space providing us with alien friends and new world homes, or apocalyptic meteors;

· Contrasting views of our future relationships with animals: will we have killed off all the endangered species, or will technology allow us to speak with our four-legged friends?

· Robots capable of all sorts of things, from walking the dog to doing your homework, with contrasting images between now and the future.

What was clear from all the entries is that the children of Ireland have a strong sense that if we make the right decisions, the world can be a place without hunger, without poverty and with peace for all.

One of this year’s judges, Artist and Director of Arts and Disability Ireland Padraig Naughton, said: “I’m delighted to return as judge for the Junior Painter of the Year Awards. I believe it’s a great way for children to learn about how people live with a disability, both here in Ireland and in developing countries around the world, by using their wonderful imaginations to create an exciting piece of art. We’ve had some amazing entries and it was no easy task to pick these regional winners.”

Michael Marren, CEO of Sightsavers Ireland said, “I want to congratulate all of this year’s Junior Painter of the Year finalists. It’s always a delight to see what paintings the children produce each year and they should be very proud of their achievement. It’s fantastic to know that all of these children across the country are getting a better understanding of what a gift our sight truly is, and what life is like for children living with visual impairment in developing countries around the world.”

The Junior Painter of the Year Awards competition is proudly sponsored by The Irish Times and ReCreate, an arts and creative reuse project which collects unused materials from businesses around Ireland for art, craft, theatre and creative projects. This year’s top three finalists will win substantial cash prizes for their schools. Every child that entered receives a Certificate of Participation in recognition of their creative efforts.