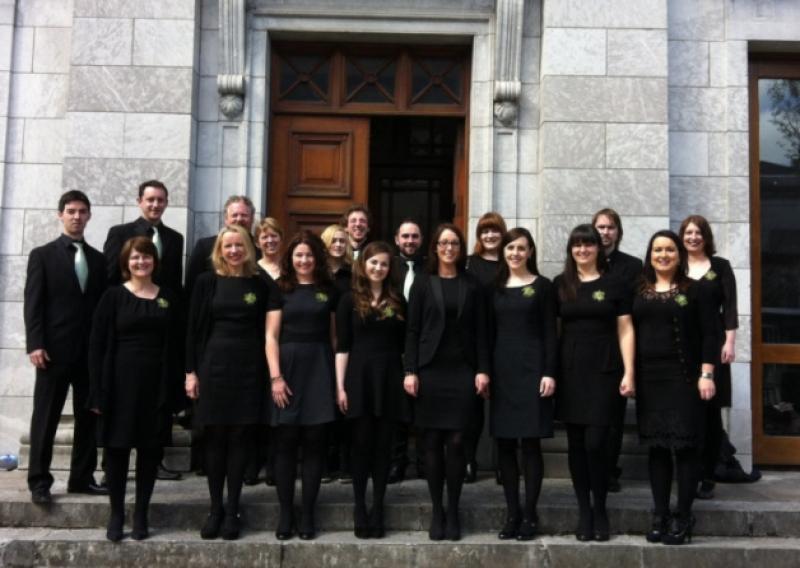 As winners of the National Choir of the Year last year, the 21 choral scholars from The Academy of Music - Tullamore were this year under pressure to present an even more prolific and challenging repertoire of choral music to maintain and achieve an even more advanced standard of choral excellence.

This year with the eyes of all choirs in the National Choral scene pinned on The Academy Chamber Choir, they have taken the choral world by storm with an even more innovative and eclectic collection of choral music, specially chosen for their competitive show-stopping nature; including the very complicated and intricate piece “Rytmus” by Slovakian composer Ivan Hrusovsky. This has yielded them even further success with Major wins in Cork International Choral Festival and Navan Choral Festival.

This year saw the inauguration of a new competition on the Irish Choral scene called “Irelands Choir of the Year”. It was chosen to hold this year’s competition at Cork International Choral Festival (one of Europe’s leading choral festivals). The competition was held in Corks City Hall – an exciting “Lights, Camera, Action” event with most leading Irish choirs competing, of which one chosen being “The Academy Chamber Choir”. Adjudication came from a panel of 5 of the top international adjudicators hailing from the United States, Hungary, Finland, England and Ireland. The Academy Chamber Choir won Third place, which now gives them the official ranking of being the Third best choir in the Country.

With this achievement the choir pushed onward to Navan Choral Festival where last weekend they swept the boards yet again winning 1st prize at the Early Music competition, 1st Prize at the Irish Language competition (performing a new work “Siosuram So” by leading Irish composer Michael McGlynn) and 2nd prize in the Sacred Music competition.

With all this success The Academy Chamber Choir are hungry to push forward again where they are going to compete in Mayo International Choral Festival on the 25th May next, where they will yet again come head to head with Irelands leading choirs and many choirs from abroad.

The Choir have already been approached by several international choral communities requesting for them to compete abroad; which the choir are currently digesting as a possibility for 2014 on the back of their success. Prior to Cork International choral festival, the choir this year had first place wins at Kiltimagh Choral Festival and of course a prestigious 2nd place in the RTE Lyric FM “Choirs for Christmas” competition out of 400 choirs nationally.

More Details and Photos on www.theacademyofmusic.ie and if you would like to hear the choir perform, they have been invited to open this years “Tullamore International Organ Festival” in the first concert of the series with the world renowned English organist Peter King (Director of Music at Bath Abbey, England). This concert will take place on Tuesday, June 25 at 8pm in the Church of the Assumption, Tullamore.

The Tullamore Academy Chamber Choir was founded in September 2007 as part of a performing groups initiative undertaken by The Academy of Music in Tullamore.

Each choral scholar is a student of voice with The Academy and has a different and wide-ranging background in solo, operatic and competitive performance, which enhances the choir’s ability to undertake some of the more challenging choral works and contributes to their fresh and unique sound. The Academy Chamber Choir’s repertoire spans from early to contemporary music.

They are current holders of the “National Choir of the Year 2012” which they won last may at “Navan Choral Festival” after also winning first place in the Sacred and Early music Competitions. They have had huge success in almost every national choral festival including many awards at “Cork International Choral Festival” where they recently won The “John Mannion Memorial Trophy” as well as the Perpetual Trophy for the Performance of Irish Contemporary Choral Music. They have also won awards at Sligo Choral Festival and first place at the Plainchant competition at Limerick Choral Festival. As part of their performances as National Choir of the Year 2012 they have stood in for the Palestrina Choir at St. Mary’s Pro Cathedral and were most recently invited to perform in place of St.Patrick’s Cathedral Choir at their Mid-Term Eucharistic celebration. They recently worked closely with Colin Mawby in private master classes on his works, performances of which have brought much success to the Choir. This Christmas they performed their annual Carols for All carol service with Prof. Gerard Gillen on Organ. Their most recent success was 2nd place in RTE Lyric FM’s Choirs for Christmas Competition out of 400 choirs.

Director Ciaran Brady has an Honors Master’s degree in Music and vocal performance from N.U.I. Maynooth. Further post-graduate studies brought him to Germany where he trained in Advanced Vocal Technique with Prof. Markus Goritzky at the “Hochschule für Musik” in Freiburg.

Ciaran is Director of the Academy of Music in Tullamore and is also a full time professional Vocal Coach. Ciaran’s Voice training started at the age of 10 as a boy treble and Head Chorister of the famous “Palestrina Choir”. Professionally he was a member of the “RTE Chamber Choir” and founder member of “The National Chamber Choir”. He also has extensive work as a soloist and recordings and has worked with companies such as “National Opera”, “Opera Northern Ireland” and “Opera Ireland”. Ciaran is also a prolific choral educator and conductor and is also Director and Conductor of “Moate Youth Choir” and was Director of the “Maynooth University Chamber Choir”.