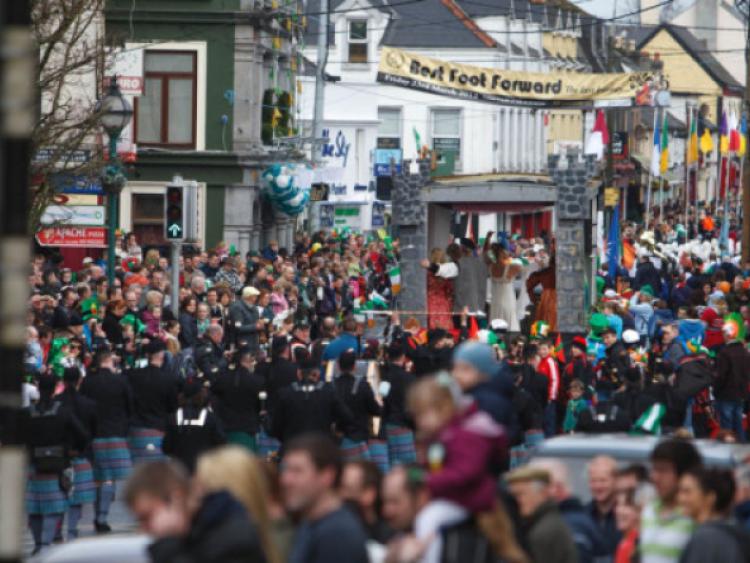 TULLAMORE is gearing itself up for a four day St Patrick’s Day Festival as part of The Gathering which gets underway this Friday and runs all the way through to Monday.

TULLAMORE is gearing itself up for a four day St Patrick’s Day Festival as part of The Gathering which gets underway this Friday and runs all the way through to Monday.

The focal point of the festival is the parade on St Patrick’s Day itself however there are numerous events and activities planned across the four days.

The parade gets underway at 11.30am on Sunday from the Bridge Centre and Dermot O’Brien, President of the Offaly Association in London.

As usual there will be a variety of entries in the parade including six Marching Bands, local sports clubs and different youth organizations along with community groups and individuals groups, pet animal entries, vintage and a few surprises along the way.

Local company, StageCraft Ireland are collaborating with the parade providing various workshops in Costume and Mask Making, Poi Spinning and Stilt Walking Workshops in St. Mary’s Youth Centre and the Presbyterian Hall, High St. An ensemble of Stilt Walkers, Poi Performers and Puppets are emerging from these exciting workshops and they are sure to wow the spectators at the parade this year.

The St. Patrick’s Day Parade in Tullamore is now a well established parade with 1,500 participants and up to 10,000 onlookers. There are many very entertaining parade entries based on topical issues – all competing for several category prizes!

While the parade is the focal point of the weekend, the festival itself gets underway on Friday with a number of events in the town.

The Tullamore DEW Visitor Centre is at the centre of the celebrations and is hosting an Open day on St Patrick’s Day from 2pm to 6pm. On Friday from 8pm to 9.30pm in the Centre, local Historian, Michael Byrne, will give an illustrated presentation on the history of distilling in Tullamore Town, and in particular the development of Tullamore DEW. There will also be tours available on Saturday and Monday.

Also on Friday there is a Battle of the Bands in Fergie’s Bar in Market Square and Tullamore Ceoltas are having a function at 8pm in the Bridge House Hotel.

On Saturday, March 16, there will be a Market and Craft Fair in O’Connor Square, a variety of activities on the canal including barge trips, canoeing and rowing, Tullamore Arts Festival will be putting on a Craft Workshop, bouncy castles will be provided in Kilbride Street along with children’s activities in Kilbride Park plus open air live music from 12pm to 8pm in Market Square.

On St Patrick’s Day itself the parade is the highlight of the day getting underway at 11.30am.

The festivities carry into Monday with a major Vintage Event in Market Square from 11am to 6pm and there will also be a taste of turf cutting ‘Offaly style’.

It is also planned to have a fishing competition on the canal from 11am to 4pm and the weekend is rounded off with an old style ceili from 8pm till late at Ballykilmurray Hall. They are having a traditional Irish Set dancing ceili with a mixture of social dancing thrown in for good measure.

It should be a fantastic weekend in Tullamore with something for everybody across the four days.