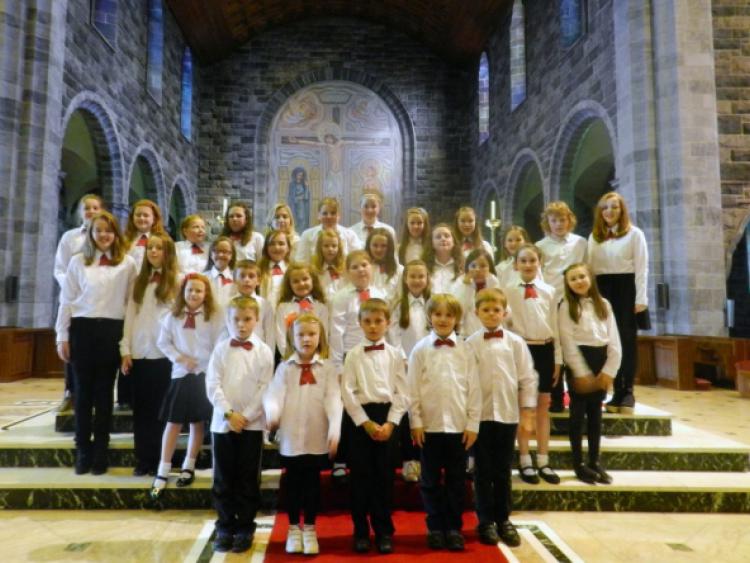 This year was a particularly successful year for Moate Youth choir. They have had success at Arklow Choral Festival back in March, and they have just returned home from a very successful trip to Galway Cathedral.

This year was a particularly successful year for Moate Youth choir. They have had success at Arklow Choral Festival back in March, and they have just returned home from a very successful trip to Galway Cathedral.

On the back of their recent performances at Christmas and Arklow’s success Raymond O’Donnell who is the Director of Music at the Cathedral invited them to take part in the Cathedral Summer Performance Series, which is attended by many local people and foreign tourists.

The day was both fun and educational. They started with a visit to Galway University adjacent to the Cathedral, where they played a game of Rounder’s, and they then were given a tour of the Cathedral and a Display of the magnificent Church Organ by Raymond O’Donnell himself.

They sang their hearts out at their performance in the Cathedral and also on the way home on the Bus.

They gave an end-of-year concert on Sunday in St.Patrick’s Church, Moate which was also a special day for the Choir when they bid farewell to their accompanist Adam Collins.

The choir have been extremely lucky to have had Adam as their official organist at the 10am Mass every Sunday in St. Patrick’s Church, Moate.

He is a very talented young musician who has just completed his studies at St.Finian’s in Mullingar. So much so, that he was approached to audition for the Position of Organ Scholar at St.Mary’s Pro Cathedral in Dublin.

He was offered the job out of many organists that auditioned, and he will be starting his post next September.

When Adam agreed to work with the choir this year it opened up a whole new prospect of quality choral music that they were able to choose from for the choir to work on, and the congregation also got to hear some wonderful organ music at the end of each mass.

Moate Youth Choir was founded in 2007 by its Director Ciaran Brady (Vocal Coach & Choral educator at The Academy of Music – Tullamore) and is a growing force in the youth choral scene. The choir enjoys many musical and educational trips and have had much success competitively at festivals such as Limerick Choral Festival and Arklow Music Festival.

Moate Youth Choir is a training ground for young singers in the Midlands region. They work with sheet music, learn to sight read, and receive vocal training through an enjoyable environment whilst being immersed in fine choral music. Their repertoire is chosen specifically to challenge and develop the choir with ensemble singing and individually as young vocalists. The choir sing at 10am Mass every Sunday of the Academic year in St. Patrick’s Church, Moate.

The Choir resume their rehearsals in September and new members are more than welcome to come along to see if they enjoy it.