The Donnellys - Tipperary’s Most Hated Family 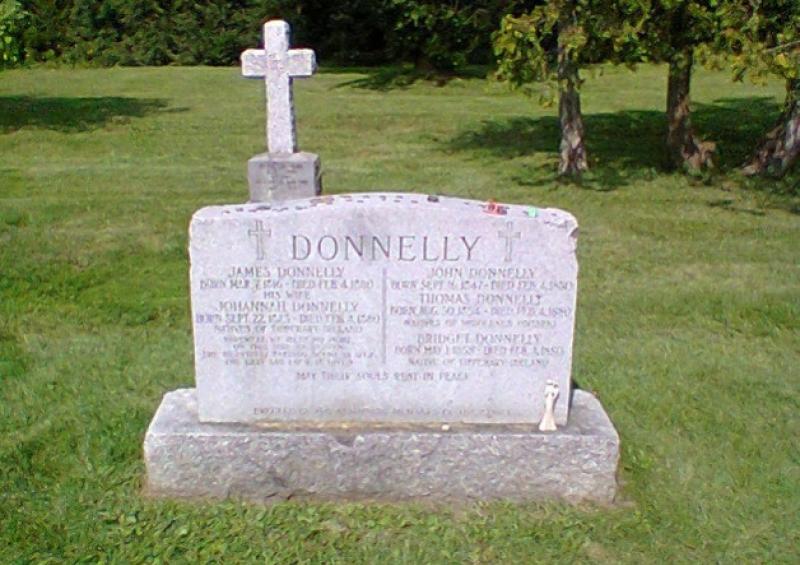 On the night of February 4, 1880 five members of the Donnelly family (three of whom) were born in Co Tipperary were murdered in their Canadian homes by a vigilante mob and nobody was ever brought to justice.

On the night of February 4, 1880 five members of the Donnelly family (three of whom) were born in Co Tipperary were murdered in their Canadian homes by a vigilante mob and nobody was ever brought to justice.

They had settled near Lucan, Ontario in Biddulph Township and even today theirs is a story that still divides and brings out the raw emotions in people in that area and beyond. Today coins, trinkets and roses are left on their grave in St Patrick’s cemetery outside of Lucan by visitors on a daily basis as a way of showing homage and respect.

The circumstances that led to their demise are long, complex yet truly fascinating. They are intertwined with many factors including religion, culture, business, politics, there’s many individuals involved and it’s easy to get led down different routes of investigation and research. There are also various views and counter views about what the family were like and about what really happened to them.

But who were this family, how did they end up in Canada, why were they targeted, why wasn’t anybody convicted of the crime and where in co Tipperary did three of the five victims come from? Their roots in Ireland and what became of them after they left is to be subject of a radio documentary.

Borrisokane historian Eamon Slevin and Tom Davis who resides in Derrinvohill House outside the town examine beliefs that the patriarch James Donnelly hailed from the local area while Pat Donnelly (no relation) discusses records that prove how his wife Johannah Donnelly (nee Magee) definitely hailed from the Tipperary / Offaly border close to where he lives.

The couple had one son before they emigrating to Canada in 1842 but the reason for their departure might not necessarily be down to poverty and starvation as was the case for the thousands that followed later. According to Ray Fazakas - a retired lawyer from Hamilton, Ontario who has been researching their story for over 50 years “there is a possibility that he was in jail at Nenagh and awaiting trail” in the months leading to them opting to board a ship.

In Canada James and Johannah essentially became squatters and settled on 100 acres that they did not legally own. They also have seven more children. Eventually matters came to a head and following a court case James was convicted of killing his neighbour Patrick Farrell who also laid claim to the property. He was sentenced to seven years in prison in 1858.

This resulted in a tide of bad feeling towards the family and they in turn adopted a more hardened stance towards many in the community. The seven Donnelly sons in particular were accused of many crimes in the years to follow yet few convictions were secured against them. According to Harry Hardy in Lucan, Ontario “the Donnellys were by no stroke of any imagination angels” yet Jim Cameron - a descendant of the family discusses how at the same time they “were not without friends”.

On February 4th 1880 a vigilante mob called to their house and murdered James, Johannah, their 25 year old son Tom and a nice named Bridget who was visiting from the Borrisokane area. They burned the place to the ground before proceeding to a second house where they shot 32 year old son John Donnelly. Many had no doubt as to the names of the guilty but despite two trials no one was convicted. Rob Salts who lives on the present day site of the Donnelly homestead describes it as “a political move on the part of the premier of Ontario “.

The documentary which includes a visit to the Lucan Area Heritage and Donnelly Museum also features an interview with a descendant of one of the vigilantes who was arrested in connection with the shooting of John Donnelly. Others interviewed are Paula Waters and Kathryn Murray from Dublin who are descendants of the Donnellys as well as historian Randy White and John Winkler in Toronto who reveals a unique Donnelly artefact in his possession. Baptismal records, newspaper accounts, eyewitness statements, legal documents together with reference to the two trails are also incorporated.

The revealing documentary entitled ‘The Donnellys - Tipperary’s Most Hated Family’ by Tom Hurley can be heard outside the county on www.tippfm.com or as a podcast.