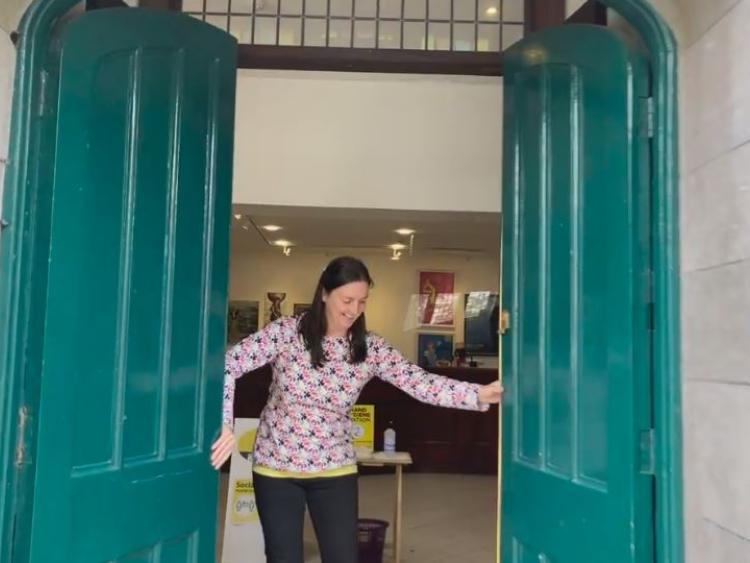 Since March this year, ‘keeping the show on the road’, has a whole new meaning for management and staff at Birr Theatre & Arts Centre.  In the blink of an eye the arts community saw their industry plummet into darkness as theatre doors closed across the country.   Initial reactions were for the rescheduling of events to June or July until the storm passed, but as time goes by, and the goal posts change there is no date in sight for the return of a full house.  At the start of the crisis, Birr Theatre was in the middle of Birr Stage Guild’s, highly applauded production of The Hired Man.  There were just three full house nights left to run when the government announcement came and all shows had to be cancelled.  In fact, Birr Theatre had approx. 1,100 tickets sold for 35 events over the coming months including Birr Festival of Music which was to take place on the May Bank Holiday weekend.  “Immediately staff jumped into crisis management, rescheduling with performers, communicating with customers directly and updating social media while dealing with the reality of what was happening:  what we had built up over the past twenty years had come to an abrupt hault!”, says Manager, Emma Nee Haslam.  Some programming went online, like Scripts Alive & Online which aired on social media at the end of May, engaging audiences throughout the country and across the pond!

Having reopened in July with limited activity such as yoga classes, Music Squad and A Chance to Dance summer camps and a wonderful group exhibition from professional practicing artists, (Artists Ignite, which is currently running) staff proceeded to create a live programme of activity (theatre, visual arts and film) to run alongside what became a virtual Birr Vintage Week & Arts Festival.  However, a second blow was to be landed when a week before the first live theatre performance Offaly was put into lock down and again, the theatre doors were closed.

The huge benefit to the whole region, of having a theatre in our town should not be underestimated.  Over the past twenty years, Birr Theatre & Arts Centre has seen over 235,000 people come through its doors; played host to professional and amateur theatre, music, film, dance, children’s arts activities and lots more during that time; been key to the establishment of four of our town’s current festivals (Hullabaloo!, OFFline, Scripts, Birr Festival of Music) and, been instrumental in the success of Birr Vintage Week and Arts Festival.  The Theatre regularly attracts national news coverage, shining a light on, and drawing visitors to, our town and surrounding region; is directly responsible for 250-300 bed nights per year and provides employment for 6 people while also providing a place of employment for artists and arts workers.   All this has been achieved by a voluntary board and volunteers who give their time willingly at front of house.  The Theatre has been built on volunteering with Birr Stage Guild at the helm in its establishment in the mid-late 1990s and ensuring its viability by providing funding towards its establishment and refurbishment.

Arts and cultural facilities not only contribute to the artistic, social and general quality of life of communities, they are also significant contributors to the economy of the region by attracting visitors, investment and job creation.  2020 has been a devastating blow to Birr Theatre & Arts Centre with income cut by almost 60%.  “While we will be embarking on a fundraising campaign over the coming months to help with the losses we sustained this year and to ensure our viability into the future,” Emma Nee Haslam says, “the vital support from Pobal, the Arts Council and Offaly County Council is critical to keeping Birr Theatre & Arts Centre operational.  A cut from any of these funders would, without doubt, see our doors close for good”.  “This would result in job losses, economic loss to the region, immediate cancellation of Hullabaloo! and Scripts festivals, reduced programme capacity, or possible cancellation of OFFline and Birr Festival of Music festivals; this would have an immediate damaging impact on our region’s tourism offering which has grown steadily over the past 20 years”, she said.

Management and staff at Birr Theatre are committed to ensuring the safety of patrons as they take steps to return to live performance.  Safety precautions and protocols have been introduced including: only booking tickets for your household, arriving to the theatre at staggered times, deep cleaning of the auditorium between shows, limited numbers attending performances, reduced show time, social distancing, sanitisers and more.   “We want our customers to be confident in our procedures and feel comfortable when they come to the theatre.  This is a new way of enjoying the theatre for everyone and we look forward to opening the doors to an audience (even a small one) once again!”

Patrons can check out the website (www.birrtheatre.com) and social media for new of upcoming events including the plans to broadcast The Trench Awards and performances from Birr Castle from Birr Festival of Music.