Offaly florist to appear on TV in hit RTE show 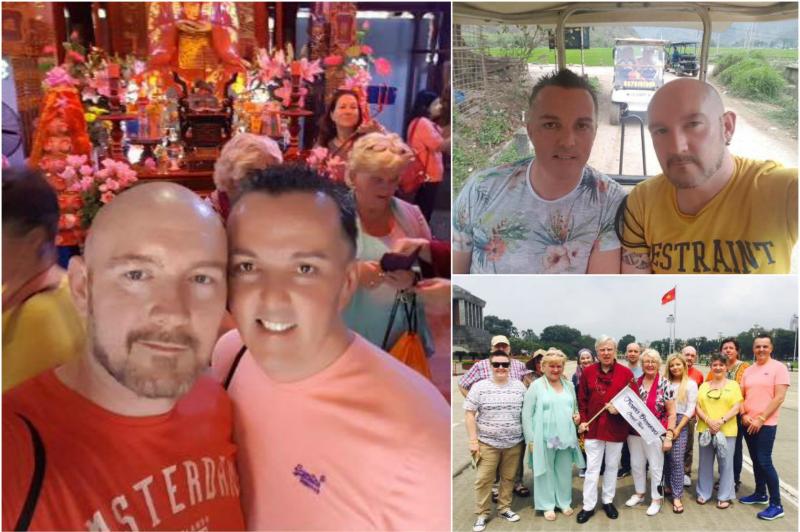 Popular Offaly florist Michael Costello-Lynch will be making an appearance on your television screens this week as the first episode of a new series of Francis Brennan's Grand Tour of Vietnam is aired on RTE.

Hotelier Francis Brennan brought 12 paying holidaymakers to Vietnam, kicking off their adventure in the capital, Hanoi, before heading west to the idyllic rural retreat of Mai Chau and continuing on a 3,000km tour of the Southeast Asia country.

Florist Michael Costello-Lynch, the proprietor of Rose Petals in Edenderry, was one of the chosen few, along with his husband Tony. The pair married last year and Michael applied for the show after enjoying the 2016 series.

"I applied unbeknownst to Tony, and got the forms and went through it all until we were called for interview and I had to tell him then," Michael commented to the Offaly Express.

"He went berserk at first," Michael laughed. Once the newly married couple had gone through the interviews, Tony was on board and Michael says they were delighted to get picked to take part.

The holiday took place in March and Michael said it was hard to keep it a secret for so long. "We didn't actually know where we were going until we got to the airport and met Francis," the popular florist explained.

The pair then joined their ten fellow holidaymakers and Michael told us they got on really well. "We had people from all walks of life, from a 22-year-old to an 81-year-old. There was a transgender holidaymaker and a priest, and everyone got on amazing."

The Edenderry businessman remarked that two of the older holidaymakers were "gas" as he suspects one of them fancied host Francis Brennan. Of the show's front man, Michael said he is a "real character and he is so nice, nicer in fact off camera than on."

"You could talk about horses or politics and everything in between, and he would have a few yarns to tell about the subject," Michael said.

He added that the trip itself was "amazing" and that Vietnam as a destination was "spectacular." "The people were so kind to us. They have nothing but they have everything in terms of their way of life, and we were all treated like royalty."

"There was no such thing as queues for us, and we were even invited to the Ambassador's residence for dinner on one night," Michael explained.

The group travelled over 3,000km on the trip and Michael admitted that the filming was tough to handle at times. "We were up every morning at 4.45am and were being filmed until 10pm that night, but I wouldn't trade it because it was such a great experience."

Despite the humidity, Michael said there were a number of highlights on the trip. "The absolute highlight was a boat trip we took on a vintage luxury boat out into Halong Bay for two nights. To see the thousands of islands surrounding us, the rock formations and to have no communication to the outside world, it was just a paradise," Michael commented.

They also enjoyed learning the history of Vietnam at various temples and tourist spots and cycling in the mountains where people hid during the Vietnam war.

One of the less enticing parts of the trip was a local delicacy involving a live snake in a restaurant. Michael takes up the story: "We were in a restaurant and they brought out a live snake and killed it in front of us. They served it a few different ways, and actually, when it was fried and wrapped in breadcrumbs or something like that it tasted like chicken." He wasn't as impressed with the boiled version.

"Then, as it's a custom, they brought out the snake's heart on a small platter. It was still beating and was there for us to taste. One girl also drank the blood," Michael explained.

"I didn't do that but I didn't want to insult their culture so I did try the snake and the heart," Michael grimaced.

He also reckons himself and Tony will not see as much screen time as some of the others, as he says, "there were much bigger characters than us, but it was great fun and we're looking forward to watching it back."

He concluded by saying he could find no real negatives in the trip and the experience on the show, exclaiming, "I would go again in the morning."

Francis Brennan's Grand Tour of Vietnam is a brand new 6-part series, airing on RTÉ One, beginning this Sunday, July 9, at 8:30pm.