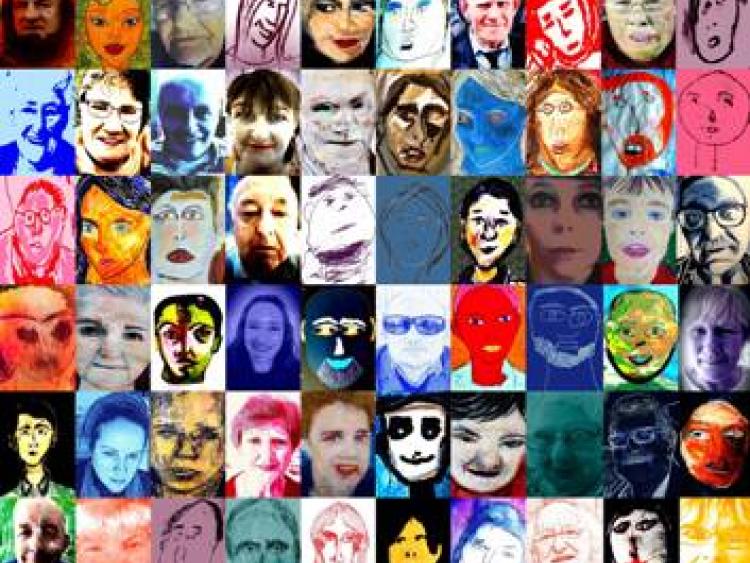 ‘100 Years, 100 Faces’ is a collection of artworks from the art facilitators and participants of Anam Beo.  Aisling Brennan, Rowena Keaveny, Jackie Lynch and Julie Spollen have facilitated and curated this exhibit of portraits, quilts, collage, lilting and reflections from the 2016 centenary year.

The artwork on show is based upon individuals from the community. It is an accumulation of portraits, old and new from Anam Beo participants. Rowena Keaveny and Julie Spollen together worked these faces into a colourful grid showing a diversity of talent and styles in the participants and facilitators approach to portraiture.

At Ofalia House Aisling Brennan facilitated Music and Reminiscence workshops, involving singing sessions and stories. Peter Kane, a member of Comhaltas for over 35 years demonstrates his voice as his instrument. Aisling recorded Peter in “Lilting” which will be played during the exhibit.

Jackie Lynch's interest in Arpilleras quilts (Argentina) came to the fore with her process led workshops at Birr Community and Nursing Unit. Residents were invited to translate these into colourful textile art. Mounted on burlap these vivid quilts tell tales of everyday life during this eventful time in Irish history.

The Irish Wheelchair Association and Riada House became immersed with their individual portraits and group collages produced during sessions with Julie Spollen. Julie has gone on to produce a short clip 'An old pedestal and a new song' using the portraits with a voice recording and music from the 1950's when there was a new positive and light energy being felt with the younger generation of that time.

Clara Day Care, the IWA and Birr Mental Health Centre also enjoyed the art and recording sessions with Rowena Keaveny, creating a diverse range of artwork and a short clip with a conversation about times that were.

Open workshops with art facilitators during the exhibition are being arranged with schools and local interest groups. Visit during opening times this week from Weds 5th – Fri 7th Oct from 1 - 4pm. It's a free exhibition and all welcome.