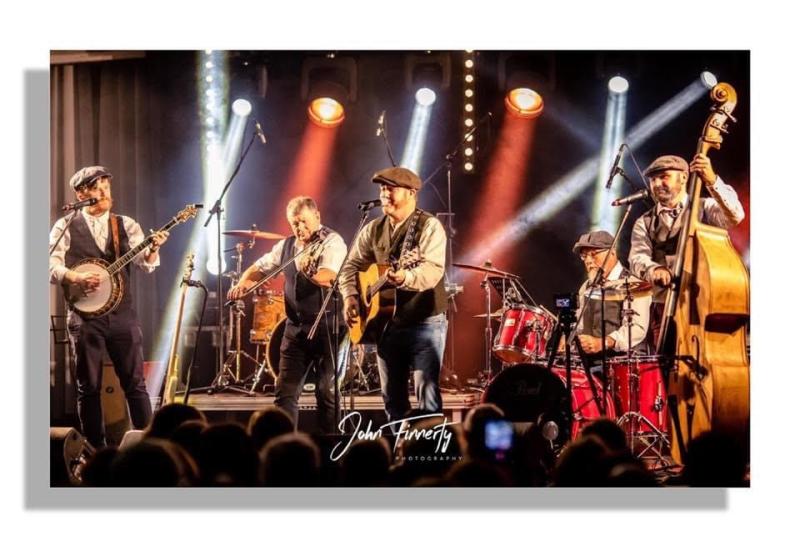 Offaly's Stephen Rosney and The Back Axles have put their own unique stamp on the Irish rock classic, Whiskey In The Jar for their latest single. And the midlands based country and Americana outfit have invited Mike Scott, one of Nashville's most accomplished and admired banjo players, to lend his presence to the project, which is set for release on January 27.

Speaking about the band's new record last week, Stephen Rosney - himself a well-known and respected songwriter - explained why they chose such an iconic rock number to put a Nashville spin on...

"Ya know, it's funny, because I get the same reaction from nearly everyone when they hear we're doing this song next! First of all, they kind of look at me a bit confused by the choice, but within seconds they have big smiles on their faces and they're telling me how much they can't wait to hear what we'll do with a song like 'Whiskey In The Jar', it's gas", laughs Stephen. "And when they hear that we have Mike on-board as well", he continues, "all they want to know is when they can get their hands on it or start requesting it at radio!"

"How we actually came to record it, though, is a very simple story. We were in the studio with Mike when he was last over here in Ireland with us, and we were just having a bit of a jam. I can't remember if we had finished something else off, or if we were waiting to start something that day. And I suppose that goes to show you how much this song overshadowed everything else from that day. But yeah, weren't we just sitting there having a jam and we found our way in 'Whiskey In The Jar', and we just went for it. And it was great craic. But it sounded great, too. And both myself and Mike kinda said to each other, ya know, we should remember this one. And I suppose eventually we did."

Whiskey In The Jar is perhaps best known these days for the version Phil Lynott's Thin Lizzy hit the Irish and UK pop charts with in 1973, or via the Dubliners who recorded it on three albums back in the 1960s, making it one of their signature tunes.

However, what some people might not be aware of is that it's actually an Irish traditional song telling the story of a highwayman wronged by his wife or lover. And while the song has also been performed by artists as diverse as The Pogues, Bryan Adams, and even Metallica at various times, Stephen explained why the Back Axles cut with Mike is really, in many ways, simply taking the song back to its own roots.

"Mike is one of the very best banjo players in the world, simple as that. That's why he's held in such high esteem in Nashville and wherever his name is known. So when a man with his talent meets a song like this, it's like two old friends meeting. Mike can sense the soul of any song, and make it jump out at you from his banjo strings. And that's what he's done right here."

When Stephen talks of the high-esteem in which Mike Scott is held, he's not over-egging things for the sake of hype. Scott has played with the man regarded as the founding-father of Bluegrass, Bill Monroe himself, and also has a world tour with bluegrass legends Jim and Jesse on his musical CV, having played with that famous duo for over twenty years.

Scott has also played with Carl Jackson and Vince Gill, and several other noteworthy names, many of them on the famous stage of Nashville's Grand Ol Opry where he's a regular performer. In fact, Scott has graced that famous old stage close to 500 times since he made the move to Nashville from his home town of Watauga, in the mountains of East Tennessee, in 1983.

A banjo and guitar player whose reputation precedes him both in the United States and internationally, Scott is also recognised as a talented singer/songwriter in his own right not to mention knowing his way around a studio as a producer and being equally comfortable as a TV host. Mike and his band were the first acoustic Bluegrass band to receive a full lifetime sponsorship from Gibson instruments in the U.S. in 1986, and his Blue Moon of Kentucky - Tribute to Bill Monroe project was voted in the Top 100 Bluegrass Albums of 2011 by the Roots Music Report.

Recorded at the Nut Shed studio and produced by Des Sheerin, Stephen has revealed that Whiskey In The Jar will also form part of the brand new Back Axles long-player - Long Legged Leprechauns - which is scheduled for release later this year.

"We're planning on releasing the album later this year, all going well, and things being safe enough to get back out on the road again. That album will include some original songs that we've been working on, and some good old-fashioned foot-tappers that people will already know and love as well. We can't wait to get ourselves back up on stage again, we really can't. So we're all excited to announce those details as soon as we can. Until then, though, we hope this new single will give people something to enjoy for a while. And we have to give a huge shout-out to our fans, to all the radio stations, and presenters who have kept our music as part of their lives over the last couple of years. That support means the world to us."

Whiskey In The Jar, the brand new single from Stephen ROsney & The Back Axles, featuring Mike Scott, will be available on all platforms from January 27, and available to request from radio in the coming days.